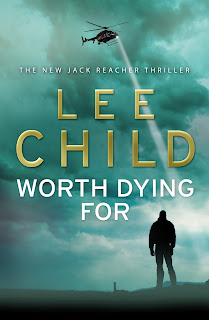 The English language publishers of international bestselling thriller writer Lee Child, reveal the title and jacket images for his next novel.

In the UK, Transworld will publish Worth Dying For on 30th September 2010 as a Bantam Press hardback. It will be the fifteenth novel in Child’s series featuring maverick ex-military policeman, Jack Reacher, and the first time he has published two books in the same year.

At the end of his latest book, 61 Hours, published in the UK in March this year, Lee Child left readers in limbo. Was Reacher dead or alive? The British edition ended enigmatically – ‘To be continued, 30/9/10.’

Transworld reveals that Worth Dying For will be another Jack Reacher novel but readers will have to wait until 30th September to find out how Reacher survived a massive underground explosion which was the culmination of 61 Hours. Read Ali Karim's interview with Lee Child here
Posted by Ayo Onatade at 15:54

Email ThisBlogThis!Share to TwitterShare to FacebookShare to Pinterest
Labels: 61 Hours, Lee Child, Transworld, Worth Dying For