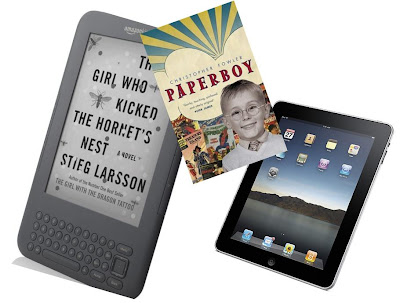 It may seem surprising to name a device among our publishing people of the year, but this has been a surprising year, especially where devices and their impact on publishing are concerned. The iPad has had a colossal impact on the book business in 2010, both in terms of what's already happened because of it, and the promise it holds for the future of books. Everybody wants to be on the iPad, and, for the most part, everybody is: the iPad lets users read books from not just iBooks but from all the e-book stores—Kindle, Kobo, Nook, and, soon, Sony—via each company's apps. And then there's the App Store itself, which is brimming with stand-alone enhanced e-book apps as well as games and utilities based on books. Plus, all kinds of straight-to-iPad publications are debuting all the time: we can only assume we'll see more and more built-for-tablet books. And with Google in the e-book game, forget about it—it'll be all about the iPad.Of course, iPad won't be the only tablet in town come 2011, but it has set the bar: every other tablet that hits the streets will be an iPad competitor, though almost certainly not an iPad killer. Whether or not E-Ink e-readers survive the tablet revolution remains to be seen, but you hardly hear anyone talking about the Kindle these days without comparing it to the iPad.

Today Random House is predicting that Stieg Larsson's Millennium trilogy, launched with The Girl with the Dragon Tattoo, will sell 15 million copies in all formats in 2010 alone. Larsson has become an American publishing phenomenon, and it's largely thanks to Sonny Mehta.Mehta, who's been at Knopf since 1987, is certainly no stranger to big authors, big books, and big deals. Although Larsson came to U.S. shores with a track record—when I spoke to Mehta in 2008 Knopf said Larsson had sold over two million copies in his native Sweden alone—there's no telling what would have happened if his books had landed in the hands of a different publisher. For Mehta, it was all about Larsson's punk hacker-with-a-heart, Lisbeth Salander. "I knew [the books'] potential success rested squarely on Lisbeth's shoulders and was banking on American readers being as captivated by her as I was," Mehta says in an e-mail last week. (In a letter by Mehta inserted in ARCs for Girl with the Dragon Tattoo, he called Salander "one of the most original heroines to come along in years.")

Incidentally, the Larsson novels are the most downloaded ebooks currently, and were the first to break the 1,000,000 download barrier.

One of my favourite horror / thriller writers is Christopher Fowler, now renowned for his surreal Bryant and May Detective series. So I was delighted to learn that his superb memoir has won the Green Carnation Award –

Fowler's memoir recounts the tale of a suburban London boy who divides his time between the cinema and the library, devouring stories and taking refuge from a tense family environment in the world of words. The prize panel called the book "beautifully written", and "a rich and astute evocation of a time and a place", recalling a childhood "at once eccentric and endearingly ordinary." Chair of the judges, novelist Paul Magrs, said Paperboy was "about the forming of a gay sensibility – but more than that, it's about the growth of a reader and a wonderfully generous and inventive writer".

Magrs, who is also a lecturer on the Manchester Metropolitan University's creative writing MA, helped set up the Green Carnation prize earlier this year after realising there was no literary award for gay men's books in the UK. He described the lack of such a prize as "scandalous", saying: "There ought to be something that celebrates and publicises the breadth and variety of their work. Writing by gay men can be funny, exciting, harrowing, uplifting and challenging – and it can range right across the genres. It can also be created by men from all classes and races."