At the Tower of London today a spectacular book launch took place. It was the launch of Tom Clancy’s new book Dead or Alive. On hand to make it an exciting promotion were Yeomen from the Tower along with some Red Devil Paratroopers.

As his publishers (Michael Joseph) stated a crack team of Red Devil paratroopers stormed the Tower of London today to launch the long-awaited new thriller by best-selling author Tom Clancy.

Four members of the world-famous Parachute Regiment display team have performed the dangerous stunt to deliver the first copies of the book, Dead or Alive, to Yeoman Warders at the Tower, where they will be guarded in the Yeoman Gaoler’s office overnight prior to its official release on Tuesday, 7th December, tomorrow.

Lance Corporal Jimmy Graham, of the Red Devils, said: “We are thrilled to have the rare opportunity to jump into one of our greatest historical landmarks, something which has not been attempted for many years. As fans of Tom Clancy, the Red Devils Freefall Team are honoured to be involved in the launch of Dead or Alive.” Unfortunately due to the severe weather conditions they were unable to parachute in, however, made an impressive entrance through clouds of orange smoke in the moat of the Tower.

The armed paratroops have carried the first four copies of the novel, which have been signed by Tom Clancy and will become part of four special military editions with items chosen by the Red Devils.

Enclosed in an aluminium case, given to the Yeoman for safe keeping, was a copy of Dead or Alive signed by Tom Clancy, a Victorinox Swiss Army knife, an engraved silver bullet and customised Army dog tags. Each will be auctioned online in order to raise money for the Parachute Regiment charity. To make a bid please click here.

Publishers claim the book is one of the most heavily embargoed titles of all time, with its launch occurring simultaneously in Britain and the US on 7th December.

Today marks the live thrilling conclusion of an adrenaline-fuelled online video trailer and television advert. This features members of the Red Devils team as Parachute Regiment soldiers on a mission to deliver the books. The trailer for the book is below.

Dead or Alive by Tom Clancy is published by Michael Joseph, £20.

Penguin will be donating 500 copies of Dead or Alive to the Parachute Regiment currently serving in Afghanistan as an early Christmas present. Tom Clancy is well known for his admiration and respect for the military forces, whom he holds in the highest esteem. Donating copies of his new thriller to Parachute Regiment soldiers is a way to pay tribute to the men and women serving their country away from home. 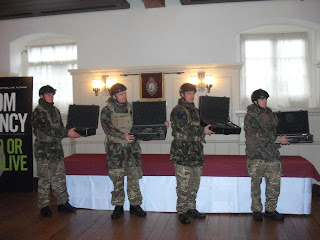 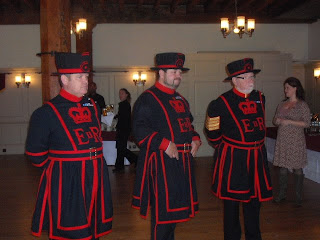 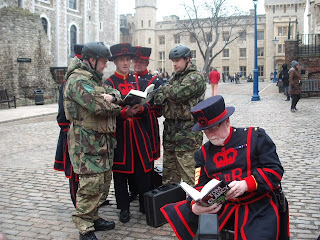 The video of the Red Devil Parachute Regiment exciting entrance can be seen in the video. Despite the cold weather it was a fantastic launch.