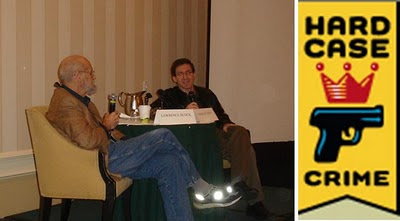 One of the delights of Bouchercon Baltimore 2008 was seeing Hard Case Crime Publisher and author Charles Ardai interview Larry Block [pictured above]. One of Ardai’s questions to Larry Block was considering the economic crisis, would he be writing anything new? Well it seems that Larry Block is penning something special, and for publisher Ardai too boot.

Lawrence Block, one of the most decorated and popular authors in the crime fiction firmament (four-time Edgar winner, four-time Shamus winner, MWA Grand Master, New York Times best seller), is writing a brand new book for Hard Case Crime, and it's going to be our debut title when we re-launch the series in September 2011.

Titled GETTING OFF: A Novel of Sex and Violence, the book tells the story of a beautiful and self-confident young woman who sets herself a mission and carries it out with ruthless single-mindedness -- to track down and murder every man she's ever slept with. (And it's not a small number, especially since she finds herself sleeping with a few more along the way.) The character is one of Block's most memorable, the first new series character he's introduced since J.P Keller in HIT MAN a dozen years ago. Like Keller, she first appeared in a short story Block found himself writing, and after she'd stuck around for a second tale and then a third, he realized he had a novel-length story to tell about her.
Thus was GETTING OFF born.
These days, it's hard to describe any book as shocking -- it's 2010, sex doesn't shock us anymore, nor even, really, does violence -- but I promise, this book is shocking. In the best possible way. There are moments in the story when I predict even the most jaded reader will find his or her jaw dropping.And in recognition of the fact that the book is, shall we say, somewhat...spicy...the author has decided it's appropriate to revive a pseudonym he hasn't used in nearly 40 years, under which he wrote seven highly erotic novels in the 1960s and 70s. Accordingly, GETTING OFF will be published as by "Lawrence Block, writing as 'Jill Emerson'." As a long-time fan not only of Larry's work but of Jill's, I have to say it's exciting to see her return after too many after decades of Salinger-like silence...Couple of other bits: GETTING OFF will not only be our re-launch debut title but also our first ever hardcover original. We plan to bring it out in paperback as well, of course -- but it felt like an occasion like this deserved a hardcover to commemorate it. The cover is being painted by Greg Manchess, winner of multiple gold medals from the Society of Illustrators and creator of such iconic cover images for Hard Case Crime as FADE TO BLONDE and THE VENGEFUL VIRGIN.
The book will be the first published under our new collaboration with UK-based Titan Publishing and will be distributed in the U.S. and Canada (as all of Titan's books are) by Random House.This is easily one of the most thrilling announcements I've had the privilege to make since creating Hard Case Crime. I grew up reading and loving Larry's books, and the idea of getting to collaborate with him to bring a new one into the world is...beyond words. We're honored that he chose us as the home for this book and look forward to giving GETTING OFF the kick-off it so richly deserves.