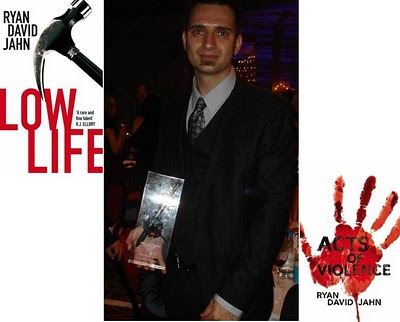 I was first introduced to Ryan David Jahn thanks to both Roger R.J. Ellory and my Welsh colleague – The Crime Fiction Reader. They both raved about his debut novel ‘Acts of Violence’ with Roger providing a blurb for Jahn. I was fortunate to meet Jahn earlier this year at the CWA Dagger Awards, and over a flute of champagne we discussed Harlan Ellison’s The Whimper of Whipped Dogs, which also used the Kitty Genovese case as the backdrop.

Atkins described his new novel, The Dispatcher (July 2011), as ‘one of the most exhilarating, original and exquisitely written thrillers I’ve read in years.’ The first book in the new contract is scheduled for 2012.

Ryan David Jahn grew up in Arizona, Texas and California. He left school at sixteen to work in a record store and subsequently joined the army. Since 2004 he has worked in television and film. He currently lives in Los Angeles.

Thanks for the mention, Ali.
A superb debut and a very worthy winner of the CWA's John Creasey (New Blood Dagger). I have heard excellent things about Ryan's third novel from other sources too. Looking forward to reading it!

P.S. Roger and I have wonderful taste. Obviously. ;)