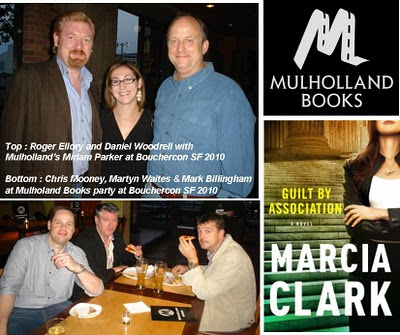 I really enjoy the output of Mulholland Books and their US website / Blog; which for a publisher is excellent. Instead of a hard-sell of their own published authors, they feature interesting articles from many writers from other houses. Recently we’ve seen posts from Michael Marshall [Smith], Roger [R.J.] Ellory, Joe Lansdale, Maxim Jakubowski, Mike Robotham, Lawrence Block and many others, which you can access here – this resource is regularly updated thanks to the work of Mulholland’s hard working Miriam Parker. I would urge you to bookmark this superb site if you like crime and thrillers.

We are also delighted to see Mulholland cross the Atlantic joining forces with Britain’s Hodder and Stoughton with an exciting series of novels. Though we have to also report that Mulholland Editor Anne Clarke leaves at the end of the year for pastures new, as Editorial Director of Orbit, the SF Imprint. Ruth Tross takes over duties as Editor of the Mulholland UK imprint and has her work cut out with a new list for a new year.

The first release from Mulholland UK is Guilt by Association by Marcia Clark who will be coming to the UK in May for the release.

Los Angeles D.A. Rachel Knight is a tenacious, wise-cracking, and fiercely intelligent prosecutor in the city’s most elite division. When her colleague, Jake, is found dead at a grisly crime scene, Rachel is shaken to the core. She must take over his toughest case: the assault of a young woman from a prominent family.

But she can’t stop herself from digging deeper into Jake’s death, a decision that exposes a world of power and violence and will have her risking her reputation–and her life–to find the truth.

MARCIA CLARK is a former Los Angeles deputy district attorney who was the lead prosecutor on the O.J. Simpson murder case. She co-wrote a bestselling non-fiction books about the trial, Without a Doubt, and is a frequent media commentator and columnist on legal issues. She lives in Los Angeles.

Next up on the list is Fun and Games by Duane Swierczynski, in which Charlie Hardie, ex-cop-turned-house-sitter, is about to have the worst day ever. His new job comes with a B-movie actress squatter who thinks that people are trying to kill her… unfortunately for Charlie, she’s right. We’re publishing Fun and Games in June, with its sequels following in August and September. Once you’ve read the first one, you’ll understand why we couldn’t make anyone wait for too long to find out what happened next! It’s a real rollercoaster ride of a novel.

Triple Crossing, by Sebastian Rotella, is out in August – it’s a gritty, fast-paced thriller set on the US-Mexico border. Undercover cop Valentine Pescatore, US agent Isabel Puente and Mexican police chief Leo Mendez have the same aim: to bring down the drug cartels. But in a world built on lies and corruption, how do you know who you can trust? As Pescatore gets drawn ever deeper into the criminal underworld, the stage is set for an explosive showdown.

And last but by no means least, The Revisionists by Thomas Mullen is scheduled for November. Leo, a disgraced former spy, and Tasha, a lawyer grieving for a brother killed in Iraq in mysterious circumstances, don’t realise the impact their actions will have on the world, but the man known as Zed does. He’s been sent back from a future utopia with a single mission: to ensure that a cataclysmic event takes place which will ensure never-ending peace in his own time. But there may be things Zed’s superiors haven’t told him… Recalling dystopian classics like 1984, The Revisionists is a page-turning, mind-bending read.