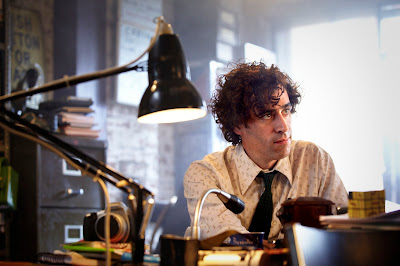 Christmas in TV land in not the season for ground-breaking new crime series. But lighter detective fare is allowed, and so this year we have a glut of new Agatha Christie dramas from ITV1 and the BBC’s sprightly Dirk Gently adaptation.

Green Wing’s Stephen Mangan follows in the footsteps of performers such as Harry Enfield (on Radio 4) in playing the holistic sleuth whose MO is to examine evidence in terms of the ‘connectedness of all things’.

And Mangan has the right blend of charlatan and inspired amateur to bring author Douglas Adams’s oddball detective to life – not that he bears much physical relation to the pudgy man with thick metal-rimmed glasses described in the two published books.

But that, and other changes from the novels, should only upset Adams obsessives. This hour-long adaptation is slick, succinct and has a very watchable cast.

Helen Baxendale has a great sitcom track record with Cold Feet and Friends on her CV, as well as straight roles in crime dramas such as Lewis and Marple. She plays Susan, the no-nonsense voice of reason, believing Dirk’s theories to be ‘crap’.

Finding Henry is the mission – ‘He’s all I have,’ says Mrs J. Henry is, of course, her moggy. How are Henry, Susan and her long-ago boyfriend Gordon, MacDuff and Mrs Jordan all interconnected?

It takes the chaotic, disreputable Gently and his theory that ‘every particle in the universe affects every other particle’ to form the incoherent clues into a case that wouldn’t stand up in a court, but should amuse fans and newcomers to the world of Douglas Adams.

No one could say ITV1 hasn’t celebrated 2010’s glut of Agatha Christie anniversaries in style.

To continue Julia McKenzie and David Suchet’s residencies as Marple and Poirot – and bring cheer to the Dame’s huge fanbase on the 120th anniversary of her birth, the 80th anniversary of Marple’s first appearance and the 90th for the Belgian sleuth – the network has three new adaptations in the run-up to Christmas.

The stand-out drama is definitely Murder on the Orient Express, one of Christie’s best-loved mysteries. 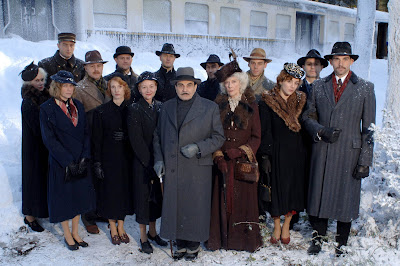 Suchet, after 22 years in the role, finally gets to play Poirot in his most iconic case. And the actor says, ‘It's an honour to have such a wonderful international cast on board for this world famous murder mystery. Writer Stewart Harcourt, has created an exquisite script. His attention to detail is impeccable.’

And a sign of just how big a deal this is in the Christie firmament comes from the Chairman of Agatha Christie Ltd, Mathew Prichard, who says, ‘It’s high time that Agatha Christie fans had another interpretation of my grandmother’s wonderful Murder on the Orient Express to enjoy, and I’m delighted that this one has attracted so many well known names.’

Of this adaptation, Suchet adds, ‘We’re not doing it as a remake of the film, Stewart [Harcourt] has approached it from a very interesting and tantalising point of view.

‘This is more of a psychological drama. We are, right from the beginning, faced with Poirot in a different frame of mind to how we’ve ever seen him before.’

Murder on the Orient Express is ITV1’s two-hour blockbuster for Christmas night, going out at 9pm.

And then there are the two Marple mysteries. The first is The Secret of Chimneys (Monday, 27 December, 9pm), with Edward Fox (Lord Caterham), Ruth Jones (Miss Blenkinsopp), Dervla Kirwan (Bundle) and Michelle Collins (Treadwell) among the star-studded suspects.

Chimneys is, of course, a grand house once known for its diplomatic gatherings. Lord Caterham is planning to sell it, but an important guest, Austrian Count Ludwig, is found shot dead. To solve the crime, Miss Marple has to weigh up the dead man’s long affair with a mystery woman at Chimneys and the discovery of the bones of a young servant murdered there two decades before…

Finally, there’s Marple’s investigation of The Blue Geranium case (Wednesday, 29 December, 9pm). Here she needs the help of Sir Henry Clithering (Donald Sinden) to stop a court hearing because she has new evidence about the death of wealthy, unpopular Mary Pritchard, who died when the geraniums in her wallpaper turned blue. 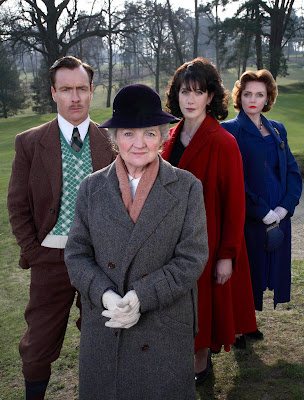 (C) ITV Plc.
At least Julia McKenzie feels she has cracked the mystery of how to play Marple. She says, ‘I feel pleased with the way my Marple has been received. I’m enjoying it immensely. I was rather in shock in the first couple of films because I did take over the role very quickly. I was just so surprised to get the part, added to which was the trepidation of taking over such an iconic role. I feel now that I’m much more secure in the characterisation.

‘Obviously, it was a bit worrying when the first few films came out. I wasn’t sure how they would be received. But now I feel I’ve settled into it and would like to play her for the rest of my working life if there are enough stories to go round.

‘The Blue Geranium is a short story and it’s the first time anyone has adapted an Agatha Christie short story for television. Stewart Harcourt [the screenwriter] has done it brilliantly. It’s quite an intriguing tale. One of the treats of playing Marple is that you get new inspectors all the time and finding a way through how they accept Marple. And I had a lot of fun with Kevin McNally [Detective Inspector Somerset]. His detective was, as Miss Marple points out, a bit of a drinker and she gets round him that way. She always finds their Achilles heel.’

It all gets more edgy once the New Year has been toasted. January promises fewer cosies and laughs, more drama and gore. Here’s a round-up.
Zen – Vendetta 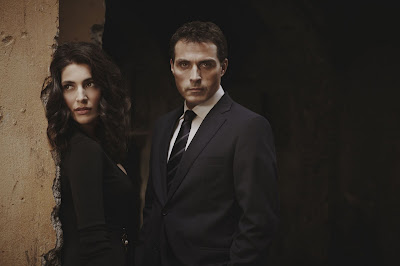 (C) BBC/Left Bank Pictures
(BBC1, first week of January, date and time to be confirmed) is Rufus Sewell’s much-anticipated debut as Michael Dibdin’s Italian detective, Aurelio Zen. Italian actress Caterina Murino is his love interest. In this opener, Zen has to investigate a multiple murder, that of flash millionaire Oscar Faso and his guests.

Forensic drama Silent Witness is back for series 14 (BBC1, again first week of January, but date and time to be confirmed). In a two-part story, A Guilty Mind, three patients die suddenly on the same ward of a London hospital. Emilia Fox, William Gaminara and Tom Ward return.

Hustle, the light-hearted and frothy take on a gang of scamsters who dish out expensive retribution to the corrupt and powerful, also returns (BBC1, first week of January, date and time to be confirmed). This time Albert, played by Sixties smoothy Robert Vaughn, has three new marks for the tricksters – an arrogant aristo, a bent MP, and a shady judge.

Looking further ahead, the Beeb has announced a new thriller starring Damian Lewis called Stolen. It’s a story of modern child slavery and Lewis, taking a break from his US projects such as the TV series Life, plays Detective Inspector Anthony Carter, who works in the Human Trafficking Unit and tries to save stolen children.

With new ITV crime dramas later in the year, such as Vera and The Suspicions of Mr Whicher, 2011 could be a bit special, if bloody.

• Robin Jarossi is a TV journalist and the editor of CrimeTimePreview.com
Posted by Mike Stotter at 14:00