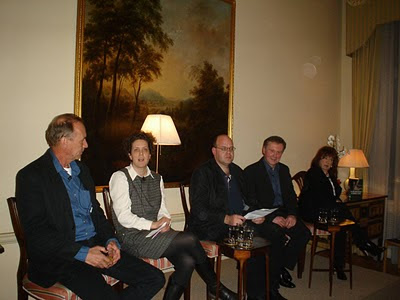 In case you missed The Rap Sheet’s alert on two rather interesting TV specials focusing on Scandinavian and Italian Crime Fiction, we have the information for your diaries. We were alerted by critic Barry Forshaw who appears on both shows giving a critical perspective of the importance of translated crime fiction -

Draw the curtains and dim the lights for a chilling trip north as Timeshift investigates the success of Scandinavian crime fiction – and why it exerts such a powerful hold on our imagination.

‘The Girl with the Dragon Tattoo’ is a literary blockbuster that has introduced millions of readers to the phenomenon that is Scandinavian crime fiction – yet author Stieg Larsson spent his life in the shadows and didn’t live to see any of his books published. It’s one of the many mysteries this programme investigates as it travels to Denmark, Sweden, Norway and Iceland in search of the genre’s most acclaimed writers and memorable characters.

The programme looks at Henning Mankell’s brooding Wallander series, with actor Krister Henriksson describing the challenge of bringing the character to the screen, and it asks why so many stories have a political subtext. Nordic Noir finds out how Stieg Larsson based the bestselling ‘Millennium’ trilogy on his work as an investigative journalist and it reveals the unlikely source of inspiration for his most striking character, Lisbeth Salander. The programme also meets Jo Nesbo, the Norwegian rock star turned writer tipped to inherit Larsson’s mantle, and Karin Fossum, an author whose personal experience of murder has had a profound effect on her writing.
Narrator: MARIELLA FROSTRUP
Producer/Director: ROBERT MURPHY

ITALIAN NOIR - THE STORY OF ITALIAN CRIME FICTION
BBC4, Dec 27th at 9.30pm
Timeshift profiles a new wave of Italian crime fiction that has emerged to challenge the conventions of the detective novel. There are no happy endings in these noir tales only revelations about Italy’s dark heart – a world of corruption, unsolved murders and the mafia.

Italian Noir features exclusive interviews with the leading writers from this new wave of noir including Andrea Camilleri (Inspector Montablano Mysteries) and serving Judge Giancarlo De Cataldo (Romanzo Criminale) who explains how his work as a real life investigating judge inspired his work. From the other side of the law, Massimo Carlotto talks about how his novels were shaped by his wrongful conviction for murder and years spent on the run from the police.
The film also looks at the roots of this new wave. First Carlo Emilio Gadda (That Awful Mess) used the detective novel to expose the corruption that existed during Mussolini’s fascist regime and then after the Second World War Leonardo Sciascia’s crime novels (The Day of The Owl) tackled the rise of the Sicilian mafia. They established the rules of a new kind of noir that draws on real events and offers no neat endings.