A Tale of Two Novels: Where Crime Fiction meets the Horrific 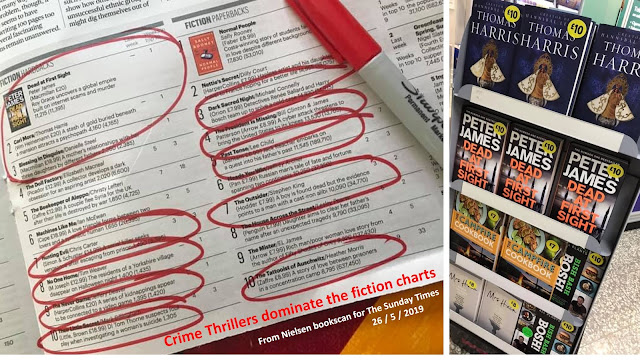 When two of the World’s greatest Thriller Writers decide to release their latest (and highly anticipated) work, in the UK, and on the same week, one has to admire the bravery of the publishers. Both Peter James and Thomas Harris have achieved both critical acclaim, as well as bestselling status for their highly acclaimed work.

Firstly, from the William Heinemann imprint of PenguinRandomHouse, we have Thomas Harris’s Cari Mora, his sixth published novel [a stand-alone] set in Miami and Columbia, and secondly from PanMacmillan we have Peter James’ fifteenth Roy Grace police procedural Dead at First Sight, set in Brighton, England as well Germany and America.

I pondered upon the diffuse line that separates crime, from the horror sub-genres of Thriller Fiction, as both Thomas Harris and Peter James could be considered as penning Crime Fiction work, that has a generous slice of the horrors that this world contains. It is well known that Peter James carries out extensive research for his Brighton based police thrillers. And Thomas Harris alludes chillingly to the New York Times, in a similar vein “I don’t make anything up, because everything I write about has happened”.

Read More HERE from Peter James as he explores the dark and dangerous side of internet dating, a prelude to his research for Dead at First Sight.

Read More HERE from Thomas Harris in this very rare interview from The New York Times, as he talks about Cari Mora.

That line between what we consider Criminal and what we term Horrific is indeed diffuse, as evidenced when you read either Peter James and Thomas Harris.

It seems like only yesterday when Barry Forshaw, Mark Timlin, Carla McKay and I sat with Peter, for lunch at The Wolsey. He had just embarked on the Police Procedurals, with Dead Simple out in Paperback [his first in the series], and Looking Good Dead just out in hardcover. I recall that lunch vividly, because looking back at the time, I actually discussed the work of Thomas Harris and the gothic character Dr Hannibal Lecter. Little did any of us know that later, much later Peter James’s Roy Grace Detective Series would beat Thomas Harris’ own work.

Then we shifted our conversation to the return of Thomas Harris and the release last week of Hannibal Rising. Mark and I were both enthusiastic about this fourth outing for Dr. Lecter, while we knew that Barry and Carla were lukewarm on the subject, at best. But like civilized people, we came to agreement on the opinion that Red Dragon (1981) and The Silence of the Lambs (1988) represent the twin pinnacles of Harris’ work. (It’s interesting, by the way, that Peter James references The Silence of the Lambs in his latest detective thriller.)

Many of us recall Peter James’ early work, his film interests as well as his foray within the Horror Genre.

“……his early work in the horror genre, which had won him designation as “the British Stephen King.” I used to be heavily involved in that genre, and enjoyed some of Peter’s horror novels, such as Host, Possession, and Prophecy. But he’s not one to be constrained by genre boundaries; Peter has published thrillers as well as horror, and Dead Simple is the first entry in a police procedural series featuring Superintendent Roy Grace of the Brighton, England, constabulary.”

So, what have readers in store from Peter James’ DEAD AT FIRST SIGHT?

A man waits at a London airport for Ingrid Ostermann, the love of his life, to arrive. Across the Atlantic, a retired NYPD cop waits in a bar in Florida’s Key West for his first date with the lady who is, without question, his soulmate. The two men are about to discover they’ve been scammed out of almost every penny they have in the world – and that neither women exist.

Meanwhile, a wealthy divorcée plunges, in suspicious circumstances, from an apartment block in Munich. In the same week, Detective Superintendent Roy Grace is called to investigate the suicide of a woman in Brighton, that is clearly not what it seems. As his investigations continue, a handsome Brighton motivational speaker comes forward. He’s discovered his identity is being used to scam eleven different women, online. The first he knew of it was a phone call from one of them, out of the blue, saying, ‘You don’t know me, but I thought I knew you’. That woman is now dead.

Roy Grace realizes he is looking at the tip of an iceberg. A global empire built on clever, cruel internet scams and the murder of anyone who threatens to expose them. 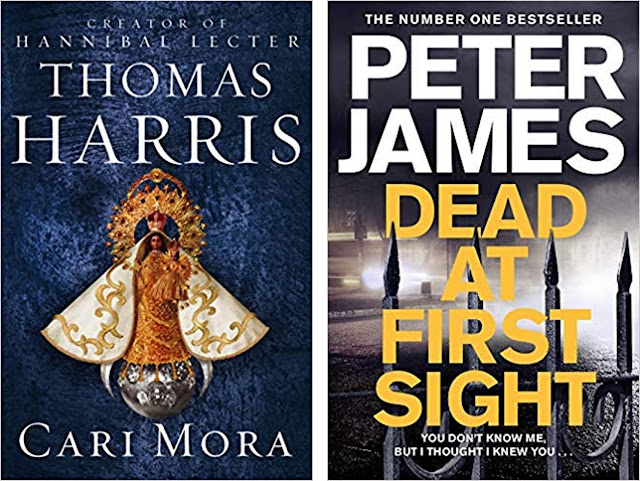 And, what have readers in store from Thomas Harris’ CARI MORA?

Twenty-five million dollars in cartel gold lies hidden beneath a mansion on the Miami Beach waterfront. Ruthless men have tracked it for years. Leading the pack is Hans-Peter Schneider. Driven by unspeakable appetites, he makes a living fleshing out the violent fantasies of other, richer men.

Cari Mora, caretaker of the house, has escaped from the violence in her native country. She stays in Miami on a wobbly Temporary Protected Status, subject to the iron whim of ICE. She works at many jobs to survive. Beautiful, marked by war, Cari catches the eye of Hans-Peter as he closes in on the treasure. But Cari Mora has surprising skills, and her will to survive has been tested before.

Monsters lurk in the crevices between male desire and female survival.

Both these highly recommended crime thrillers, could be considered horrific in terms of what they reveal about what surrounds us - because both writers research heavily, and what they uncover is unsettling. They are also available as unabridged audio narrations, downloadable from Audible.co.uk as are many great novels, more information about the importance of the audio sector. Click HERE

The popularity in crime fiction reached a tipping point last year, when it was reported

British readers have become more gripped by crime and thriller novels, with sales up by 19% between 2015 and 2017, new figures suggest.

The rise has been fuelled by the growth of psychological thrillers and the success of big names like Lee Child, James Patterson and Dan Brown.

They overtook sales for general and literary fiction, which were down 16%.

So as both Thomas Harris [the creator of Dr Hannibal Lector] and Peter James [the creator of the character Roy Grace] released their latest novels in the same week, what did Nielsen Bookscan [the industry standard in terms of book sales] report?

It seems, in a book chart dominated by Crime and Thriller Fiction, DEAD AT FIRST SIGHT by PETER JAMES was the Numero Uno in the UK. 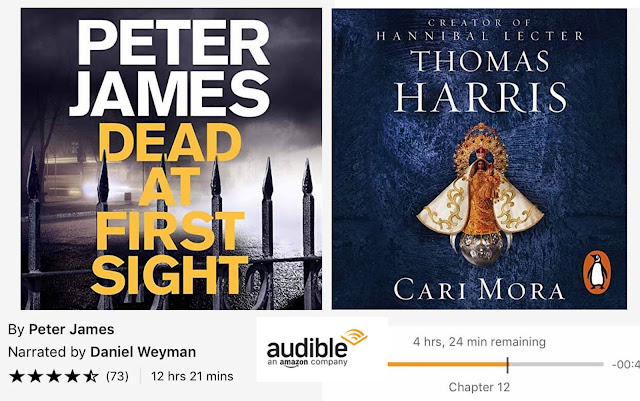 In these days of anxiety, depression and worry, it has been widely acknowledged that reading novels is an excellent form of relief.

And both Peter James’ DEAD AT FIRST SIGHT and Thomas Harris’ CARI MORA read back-to-back is a great dose, to steer ones’ thinking, as counter intuitive as it may appear with such dark books.

Remember that to fight the fire, we sometimes have to use fire, as anyone who has worked in Oil Field and Chemical Incidents knows.

Below Peter James reads the first chapter from DEAD AT FIRST SIGHT, the biggest selling novel in the UK >

While below - the first appearance of Dr Hannibal Lecktor, as played by Brian Cox in Michael Mann's 1986 Manhunter featuring William Petersen playing Will Graham. Note Dr Lecter's name was spelled Lecktor for this adaptation of Thomas Harris' 1981 novel RED DRAGON

I would urge you to seek out these two outstanding novels of Crime that feature the Horrors that lie beneath the cracks of our reality.