The Silence of the Book Reviewer

Anyone that knows me, understands my talkative nature but there is a book I am not able to publish a review until Thursday 16th of May, due an embargo reinforced by punitive legal restrictions.

The book is Cari Mora by my favourite novelist, the former journalist with the Associated Press, Mr Thomas Harris.

It’s been unbearable not being able to discuss this book, but tomorrow the restriction is lifted, and so I will be publishing my review, and seeing the opinions of others.

Last week, while walking in the rain in Covent Garden, my mind would not give me peace, as my cognition constantly revolved around the exposure to that manuscript, Cari Mora, the 6th novel by Thomas Harris. I got a fright when I walked, lost in thought - which I wrote about HERE 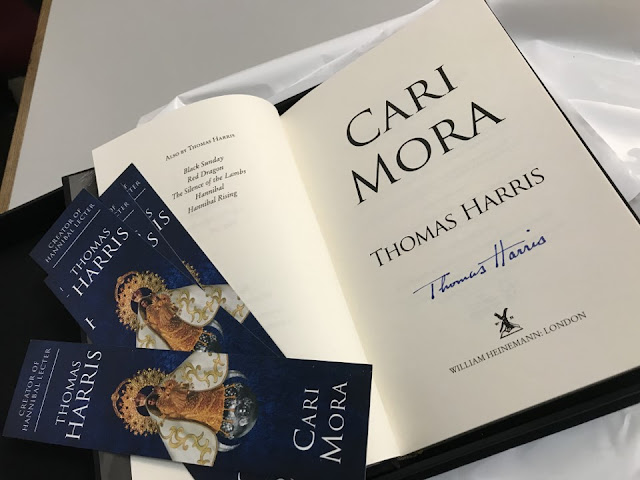 Last weekend’s Crimefest was hard for me, as I was only able to relay the information made public by Wm Heinemann HERE and the extract made public via Charlotte Bush of PenguinRandomHouse, which can be read HERE while all the while I wanted to discuss the book with others, but was unable to do so, due to the ‘Non-Disclosure-Agreement’ in place – the silence of the reviewers.

During the weekend in Bristol, I enjoyed the company many but of particular joy was chatting to the awarding writer, biographer and journalist Ruth Dudley-Edwards and the wonderful, and equally well-read Kathryn Kennison. I am fortunate to have known these two important figures in the Crime Fiction Genre for many years. We even shared a table during the Crimefest Awards Gala Dinner. It was amusing that when I got talking about my love of the work of Thomas Harris, Kathryn thought I was referring to Robert Harris. Which made both of us laugh. It was somewhat surreal that the three of us found we were all wearing Green, on the close of Crimefest on Sunday. Coordinated by fluke.

Anyway, I digress, as ever.

While making my way to Goldsboro Books, in Covent Garden for the world launch of Thomas Harris’ Cari Mora – I was again lost in thought, contemplating the book that lay heavy on my mind when again - I found my name being shouted on the street, which again startled me. This time I noticed that it was from a group of women who called me over from a pavement cafe. Surreally it was from Ruth and Kathryn who had spotted me. They were seated outside a café, sipping coffee on a very sunny London evening, with friends when they noticed me walking by.

I stopped to talk to the group, though Thomas Harris was heavy on my mind. I reminded Kathryn about us confusing Robert and Thomas Harris at Crimefest, and said mischievously that all it would take now, is for Ruth to think we were talking about Irishman Richard Harris, at which point we all laughed and sang the chorus to this song.

I had to say my farewells quicker than I would have liked, for I needed to make my way to the launch of Cari Mora, and I didn’t wish to be late.

As I walked, I thought of my love of this former journalist’s work, and how the writers with the darkest imaginations make the nicest of people.

I’m coming up to 56, and revelling in a very rare moment. The release of a novel by a writer who marks my life.

Thomas Harris is a writer who combines a very dark imagination with such an amazing ability in terms of story-telling. Thomas Harris uses words so carefully selected, configured in such a manner weaving a narrative that deploys such economy, sheer elegance. I spoke with his British Publisher Jason Arthur and his Publicity Director Charlotte Bush, telling them that as he’s aged, he cuts back the words. Cari Mora is his Sixth novel, but what a book.

Each of his novels, in my opinion have got better, sharper and more disturbing. Or perhaps a better word would be distressing.

But, more on Thursday.

“Reading his prose is like running a slow hand down cold silk.”
Stephen King in 2019 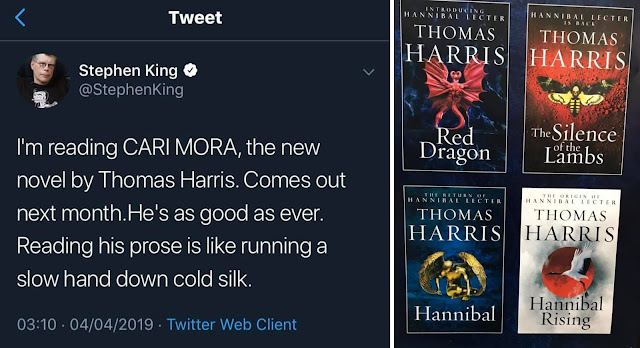 I have pre-ordered the abridged reading as my May download from Audible. Jason Arthur of William Heinemann (PenguinRandomHouse UK) told me an amusing anecdote about Mr Harris getting his voice into character for Cari Mora.

Of all my audiobooks, the abridged readings by the author rank as my favourites, he’s a great narrator that acts as he reads. He uses accents just a tad above his native American South, Mississippi twang. 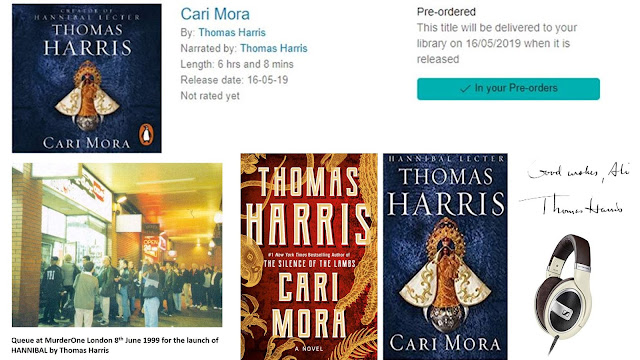 I know in vivid detail, these moments in my life, the release of a book by Thomas Harris decorates my memory, making everything vivid, and marked into retrievable memory; moments to return too, to think back at who I was at that time.

I was aged 25, a marine chemicals surveyor in 1988, and nearly screaming at London Heathrow, spotting an ‘early / advance’ copy of THE SILENCE OF THE LAMBS in the airport bookstore. It was my second trip to the Arabian Gulf (for a six-week tour of duty), it made the flight memorable as well as that Six Weeks. I read the novel four times, back to back. I remember that time like it was yesterday.

I was 36 and a senior executive in a German Chemical Engineering company. I queued at Maxim Jakubowski’s MurderOne in Charing Cross, London on 7-8th June 1999, with a hotel Room Booked, and a bottle of Amarone waiting for HANNIBAL, and the first in the queue, for this book.

In 2006, I was 43 and under a huge burden setting up a complex business that was in its infancy, those difficult years. Thankfully after 15 years, it all came good. And my reading of HANNIBAL RISING helped me cope with the adverse camber of setting up a business, and watching it so very closely, because a business is like a flower, it can be crushed or wilt without close, close management especially in those early days.

I’m now 55, and CARI MORA arrives tomorrow, which I cannot publish a review until then, Thursday 16th May, 2019, so I will be keen to see what others make of this writer’s 6th novel.

My review is written, and I have photos from last night, as well as video – which I will upload tomorrow when the embargo and legal restrictions are lifted – and my silence [and that of others] will be broken, because Thomas Harris’ narratives have decorated my mind, and the minds of others.

And thanks to Wm Heineman’s Charlotte Bush, there is an extraordinary competition, for which details are available from The Bookseller HERE  to coincide with this books launch, and Goldsboro Books have special slip-cased signed first editions on sale now.