Join us for a stimulating evening with #1 internationally bestselling author KARIN SLAUGHTER and MARK BILLINGHAM, who has just recorded his eighteenth consecutive Top Ten bestseller in the UK.

Karin will be talking with Mark about her forthcoming book The Last Widow, a gripping new crime thriller that sees the reunion of popular characters Will Trent and Sara Linton, after a three-year hiatus.

Mark's book, Their Little Secret is the brand new thriller in the Sunday Times bestselling Tom Thorne series, which was made into an acclaimed TV series in 2010, starring David Morrissey.

The event will last one hour and involve a Q&A along with the discussion. Once the event commences, copies of both authors' books will be available to
purchase and have signed. 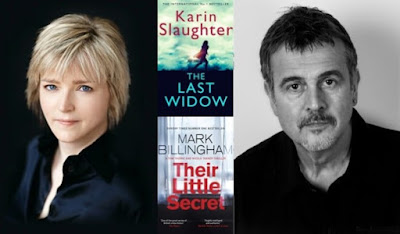 Karin Slaughter is one of the world's most popular and acclaimed storytellers. Published in 120 countries with more than 35 million copies sold across the globe, her 19 novels include the Grant County and Will Trent books, as well as the Edgar-nominated Cop Townand in the instant Sunday Times bestselling novels Pretty Girls, The Good Daughter, and Pieces of Her. The Good Daughter and Cop Townare in development for film and television and Pieces of Heris soon to be an eight-part Netflix adaption. Karin is also the founder of Save the Librarians project - a non-profit organisation established to support libraries and library programming.

Mark Billingham's book sales now top 5 million copies and he is published in over 25 countries. Each thriller in his series featuring London-based detective Tom Thorne has been a Sunday Times bestseller. His debut, Sleepyhead(published in 2001), was singled out by The Times as one of the novels that shaped the decade and has gone on to sell over 750,000 copies. Two of his novels, Lazybonesand Death Messageboth won the Theakstons Old Peculiar Award for Crime Novel of the Year. Mark began his career as an actor before writing for a variety of shows and then branching out into stand-up comedy. He has gone on to present, host and contribute widely on TV and radio.
Posted by Ayo Onatade at 09:00