Ben Aaronovitch will be hosting an hour-long discussion, in the famous Browns courtrooms, where he will be discussing The October Man, the new novella in the Rivers of London series.

The talk with last for one hour, including a Q&A. Afterwards, copies of The October Man will be available to purchase and have signed by the author. 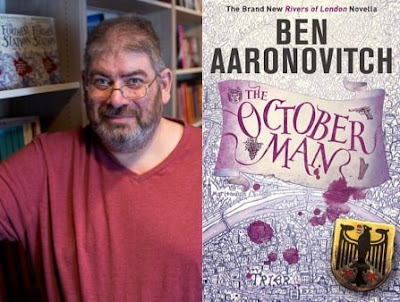 The October Man by Ben Aaronvitch (Published by Gollancz)
Trier is famous for wine, Romans and for being Germany's oldest city. So when a man is found dead with his body impossibly covered in a fungal rot only found on grapes, the local authorities know they are out of their depth.  Fortunately this is Germany, where there are procedures for everything.   Enter Investigator Tobias Winter, whose aim is to get in, deal with the problem, and get out with minimum fuss, personal danger and paperwork. With the help of frighteningly enthusiastic cop Vanessa Sommer, he's quick to link the first victim to a 'drinking-and-improvement society', created by a group of entirely ordinary middle-aged men - who may have somehow accidentally reawakened a bloody conflict from a previous century.  The rot is still spreading, literally, and the list of victims and suspects ever increasing. Solving the case may mean unearthing the city's secret magical history. So long as that history doesn't kill them first.

Information about buying tickets can be found here.
Posted by Ayo Onatade at 07:00