Until I wrote about the DS Alex Cupidi series, I'd always written from a male point of view.  If you're a woman writer, I don't suppose any of this is much of a surprise, but for me, it's been interesting to discover how different it is to be writing a female lead.

1. The power of private spaces.

I remember when I was talking about writing a female lead, my colleagues Elly Griffiths and Lesley Thomson encouraging me. I can’t remember which of them said, “The important thing is to get your conversations between women right,” but it was brilliant advice. Places where women aren’t in the company of men, and can converse among themselves, become curiously powerful spaces. No surprise, obviously, that some women go to the toilets in teams.

2. Booze, sex and swearing mean different things when women do them.
It’s not a good thing obviously, but women and men are judged differently. If a man swears there are readers who will assume he’s hard. If a woman does it, some readers equally assume she damaged, or worse, not a nice person at all. The same goes, in different proportions, for booze and sex. Lesson: If you’re creating a female hero with edges, you don’t have the same easy shortcuts that you do with men.

3. And they’re also judged differently when they put themselves in dangerous situations. When I wrote my previous male lead he was always getting himself into scrapes by acting alone, not waiting for backup and wading into the fray when he felt something needed doing. Nobody ever mentioned that as a negative. After all, you can’t create tension and drama unless your lead does stuff that puts them into danger. But there have been half a dozen times when DS Cupidi has been criticised by readers for going it alone. 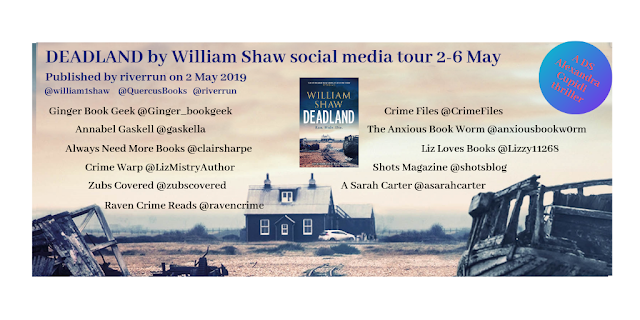 Deadland by William Shaw is published by Riverrun on 2ndMay 2019
You can run - The two boys never fitted in. Seventeen, the worst age, nothing to do but smoke weed; at least they have each other. The day they speed off on a moped with a stolen mobile, they're ready to celebrate their luck at last. Until their victim comes looking for what's his – and ready to kill for it. You can hide - On the other side of Kent’s wealth divide, DS Alexandra Cupidi faces the strangest murder investigation of her career. A severed limb, hidden inside a modern sculpture in Margate’s Turner Contemporary. No one takes it seriously – even the artwork’s owners, celebrity dealers who act like they’re above the law. You can die - But as Cupidi’s case becomes ever more sinister, as she wrangles with police politics and personal dilemmas, she can't help worrying about those runaway boys. Seventeen, the same age as her own headstrong daughter. Alone, on the marshes, they're pawns in someone else’s game. Two worlds are about to collide.