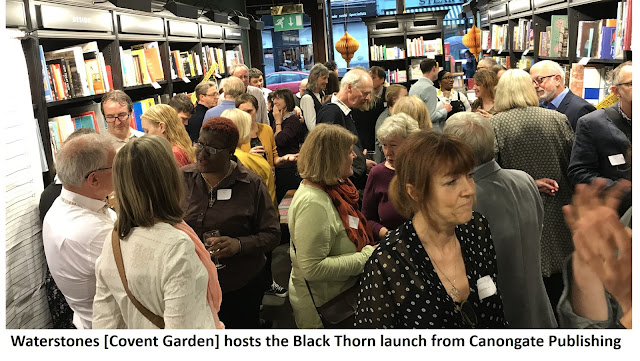 I am rarely surprised at the coincidences and weird happenings in life; though a voracious appetite for reading crime and thriller fiction can make one rather paranoid, as I found to my amusement (and that of Linwood Barclay and Kate Mills of HarperCollins UK) last week.
I found myself in London last Thursday, walking toward Covent Garden. I was deep in thought, my mind still contemplating my recent exposure to a particular novel, one that I am not allowed to talk about until the 16th of May 2019. It is a highly anticipated thriller, one that I had concerns over, namely in trying to rein in my expectations as my anticipation was high, so very high.

Though since reading it, I have to say, this book has left shards of glass in my mind, sharp edges I feel from time to time, all due to being exposed to the manuscript.

You can read an excerpt HERE of the book that has me excited, so excited
Anyway, as ever I digress. 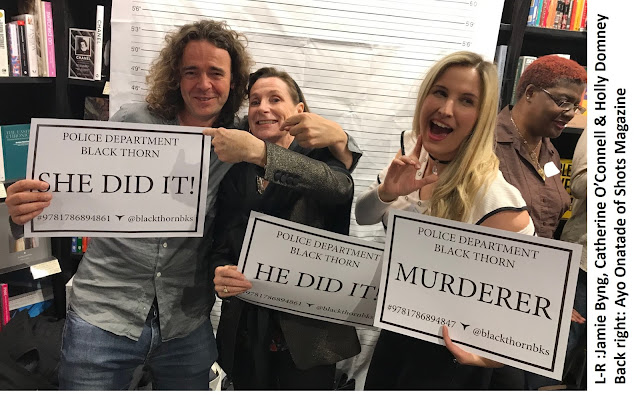 I was walking to a literary function organised by Midas PR and Canongate Publishing in Covent Garden, London. It was the launch of the new crime fiction imprint Black Thorn and hosted by Waterstones Covent Garden – CLICK HERE for background on the genesis of this exciting new initiative.
The heavens opened; rain fell; it was like a scene from Blade Runner. But I was thinking about Thomas Harris’ Cari Mora, specifically the villains that decorate the narrative.
Then I heard my name being shouted.
At first, I ignored the shouting ‘Ali’ but as it grew more urgent, the chanting ‘Ali’ became unnerving, I stopped to look around, but all I heard was ‘Ali’ again and again. I started to get worried as I couldn’t see who was shouting my name in the rain. This is the problem when I read so many thrillers – Paranoia and the latest Thomas Harris book keeps circling my mind, controlling my imagination like a nightmare, a lucid dream.
Then a car pulled up to the kerb (sidewalk) beside me. A window rolled down, and as I backed away from the car, my imagination was now a scream telling me to “run”. I was ready to escape - but then as the blacked-out windows rolled down, I saw inside - it was Publisher Kate Mills of HarperCollins UK [HQ] with Linwood Barclay. 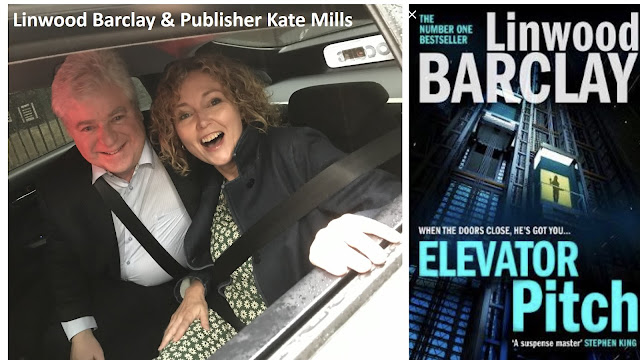 I laughed and they laughed, phew! I took a photo as is my habit, a method to decorate my memory, not unlike Dr Hannibal Lecter who created a memory palace in which to escape while incarcerated in solitary confinement in Baltimore. 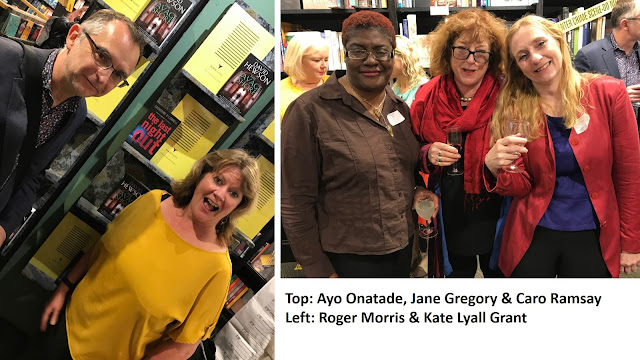 I was relieved that neither of the villains, that the Thomas Harris character Hans-Peter Schneider works for in Cari Mora, were the ones shouting my name, despite them constantly creeping into my nightmares. Instead it was Linwood Barclay who spotted me from the back of the limousine he shared with publisher Kate Mills, following a day preparing the UK launch of his next book, his first with HarperCollins UK – another thriller that I am highly excited about, ELEVATOR PITCH.

The last time I was with Linwood and Kate, was back when they both worked for Orion Publishing and treated me to an extraordinary dinner, in Baltimore during Bouchercon 2008. Though it was now a sad memory as it was the last time I had dinner with Cathy and Edward Wright. 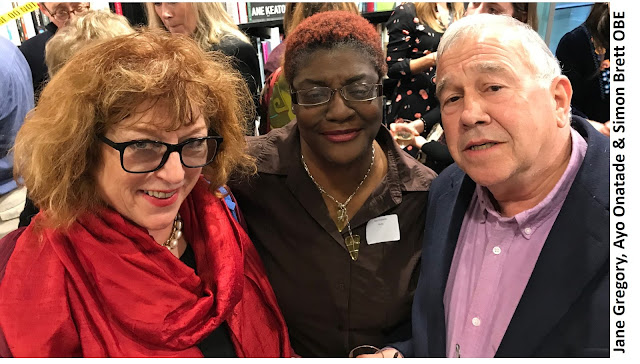 I waved Kate and Linwood off, delighted that some weird Thomas Harris villains (torn from my vivid imagination) hadn’t tracked me down to London. I continued my journey through sheets of monsoon-like rain, finding myself in the company of the equally drenched Scottish Crime Writer Caro Ramsay at the venue for the Black Thorn party, Waterstones Covent Garden. 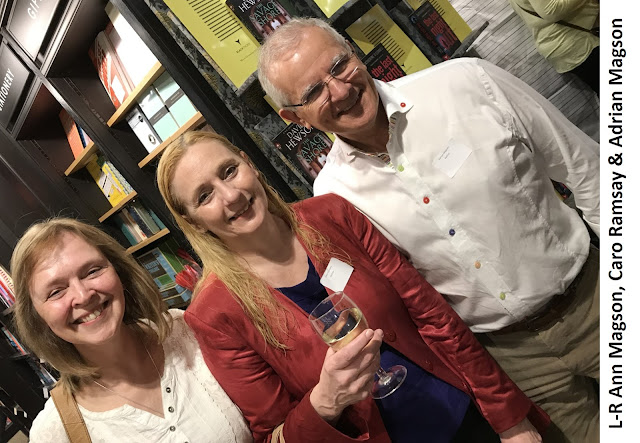 I’d just finished her last novel, the ninth in her Glasgow based police procedural series, and one of the first to be released under the new Canongate imprint Black Thorn.
I mentioned to Caro that the series has come a long way from Absolution, and The Suffering of Strangers is an extremely disturbing book. Caro laughed, and so did I even though her last work was dark, very dark.
Like Thomas Harris, and Harlan Coben like Linwood Barclay; Caro Ramsay is a very funny and life-affirming person, again proving that axiom, that the writers with the darkest imaginations (from my experience) are the nicest, and most generous as well as the funniest of people.
I shook off the rain from my jacket, and the wet smears that coated, and decorated my grey hair and joined the lively throng at Waterstones, Covent Garden. 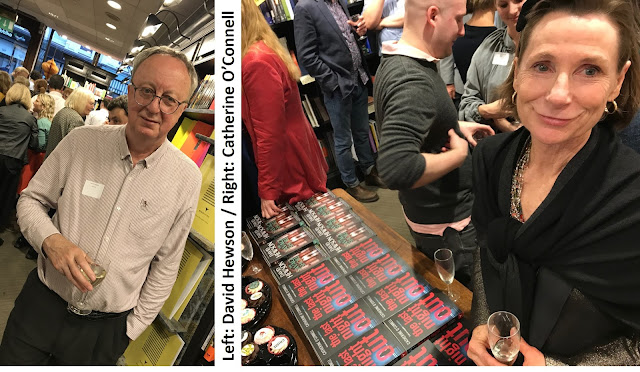 We had gathered, out of the rain to celebrate the release of the first four novels from Black Thorn. It was great to meet and talk with the authors again, especially Catherine O’Connell who had flown in from America to make the launch.
The first offerings from Black Thorn, are -
Catherine O’Connell for ‘The Last Night Out’ (May)
David Hewson for ‘The Savage Shore’ (May)
Simon Brett for ‘The Liar in The Library’ (June)
Caro Ramsay for ‘The Suffering of Strangers’ (June) 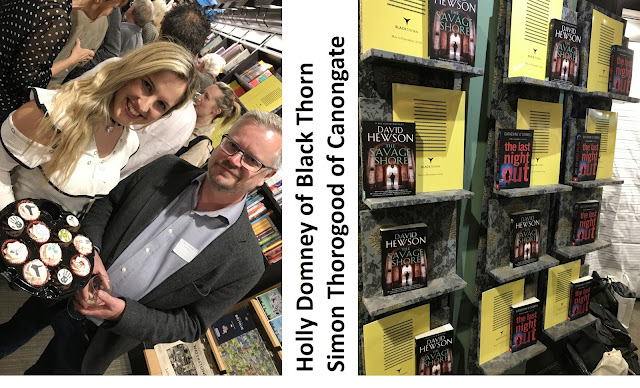 Publishing a wide range of titles from Severn House’s list into paperback for the first time, Black Thorn will release two of the list's paperbacks each month and simultaneously around the world. This will be the first time that many of these Severn House titles have been available to the trade. The imprint will be managed by publishing coordinator Holly Domney, who has moved from her role within Severn House.
Read More HERE 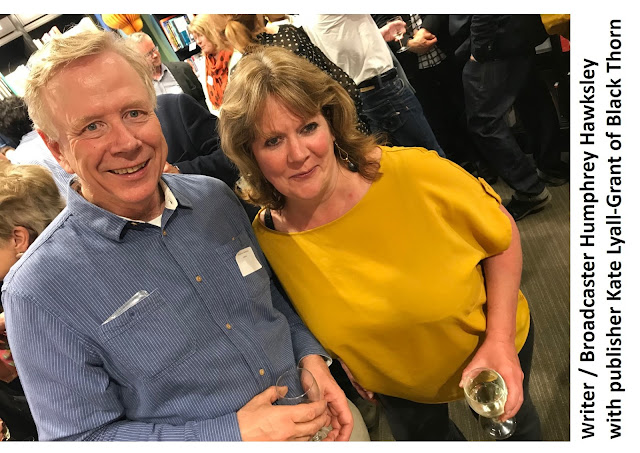 I was delighted to hear that Kate Lyall-Grant would continue as Commissioning Editor, as her experience and keen eye has always provided readers with high-quality crime and thriller fiction, both from Severn House, and in her previous positions within publishing; and it was great to see Kate attend the launch party. I was delighted to meet up with my old colleague Simon Thorogood as it had been a while since we last met, back when worked at Random House, but is now well-settled with Jamie Byng and an integral facet of the Canongate editorial team.

Soon it was time to put down our glasses of wine and slivers of cake, as Jamie Byng welcomed us, and his speech is recorded in my usual gonzo fashion HERE and embedded below

We present an array of photographs of the event.

For more information about Black Thorn, the new initiative in crime fiction via Canongate Publishing CLICK HERE and for the media launch via MIDAS CLICK HERE 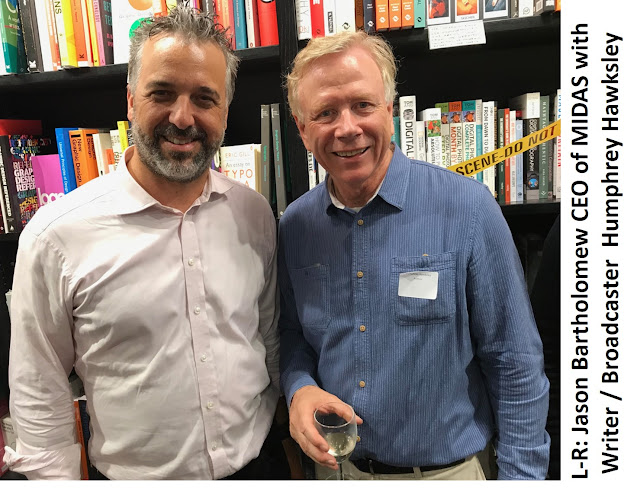 And finally, a big thank you to Sophie Ransom and Jason Bartholomew of Midas for the invitation to the party, as well as a tip of the hat to Linwood Barclay and Kate Mills for giving me a fright, as I walked in the rain, lost in my thoughts about the characters Thomas Harris decorates his 6th novel Cari Mora with. 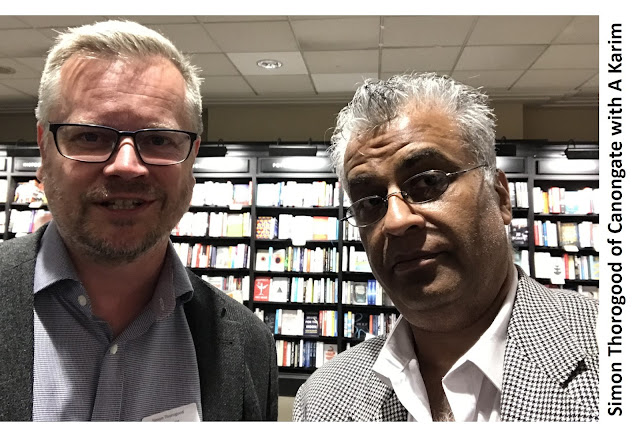