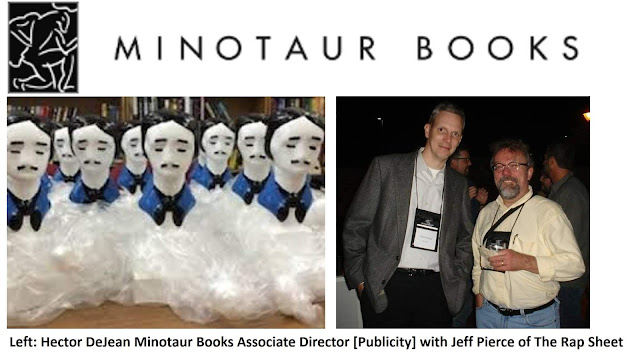 It was good to hear from our friend and colleague Hector DeJean, with some interesting news, from the Edgar Week in New York, and it illustrates the diversity of the Crime, Mystery and Thriller Genre.

Minotaur Books and the Mystery Writers of America introduced the winner of their First Crime Novel Competition at the 73rd annual Edgar® Awards Banquet tonight in New York City. The announcement was made by Catherine Richards, a senior editor at Minotaur Books.

The competition winner is Nev March, who lives in New Jersey. Her winning novel, tentatively titled The Rajabai Tower Mystery by Nev March, will be published in 2020. Set in the 1890s, The Rajabai Tower Mystery features a former soldier in the Indian army convalescing from wounds sustained in the fight against Pakistan, who becomes inspired by the Sherlock Holmes novels he's been enjoying to investigate the supposed suicides of two well-to-do Parsee women in Bombay.

Minotaur Books associate publisher Kelley Ragland added, “A vibrant portrait of India just before the turn of the century, an engaging lead character in Captain Jim Agnihotri, and a fresh homage to Arthur Conan Doyle, The Rajabai Tower Mystery was the perfect choice for our winner.”

Writing fiction is Nev March's passion. After working in business analysis for twenty years, she returned to writing full time in 2015. She is a member of the Hunterdon County Library Write-Group and volunteers with non-profit organizations FEZANA and Shine-and-Inspire. Nev lives with her husband and two sons in New Jersey.

The First Crime Novel Competition provides a previously unpublished writer an opportunity to launch his or her career with the Minotaur Books imprint. The winner will receive a one-book, $10,000 contract.

Minotaur is currently accepting submissions for next year’s award.