Charlotte Carter - In a world of jazz with Nanette Hayes 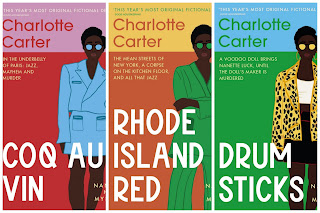 New Yorker Nanette Hayes the main protagonist in Charlotte Carter's excellent noir jazz infused series is a young black jazz musician who not only has a lust for life but an aptitude for solving crimes. Set in streets of New York this acclaimed series has just been republished by Baskerville with some glorious covers by Bristol based artist Lucy Turner who was asked to redesign the covers. Originally published in the 1990s this underrated but brilliantly written series when first published pointed me in the direction of a character who was not only funny with a sense of humour that made the series stand out but also showed that there could be strong sexually confident women who knew what they wanted and be a dab hand at solving crimes as well.

At a time when there were not (in my opinion) enough black female crime writers visible within the genre (we did have Eleanor Taylor Bland, Barbara Neely, Valerie Wilson Wesley, and Grace F. Edwards) coming across Charlotte Carter made me realise that one had to dig deeper to find these gems to read and also the fact that this series was and still is a delight, whether you are reading them for the first time or whether you are reacquainting yourself with them like I am. Any author who uses Theolonius Monk song titles as chapter headings is is certainly worth reading.

The first book in the series Rhode Island Red sees jazz loving Nanette offering a fellow street musician a bed for the night. Finding him dead the following morning Nanette is soon involved with a strange and sinister couple, a fellow jazz lover who just happens to be a gangster as well and who is someone that she could easily fall for as well as trying to solve what might be the mystery that the jazz world has been trying to solve for quite sometime. Rhode Island Red was clearly inspired by Dashiell Hammett's The Maltese Falcon, which being one of my all time favourite crime novels is another reason to enjoy this book so much. Furthermore, Charlotte Carter's love of film noir also comes shining through in her prose.

The second book in the series is Coq Au Vin and this time it sees Nanette in the city of love that is Paris. Nanette is trying to find her aunt Vivian who has disappeared. As Nanette hooks up with André a self-taught violinist from Detroit (who is also in Paris) as she searches for her bohemian aunt she finds herself once again deep in the midst of danger, this time in the dark side of historic Paris and at the centre of attention of some extremely dangerous people. Once again Charlotte Carter has continued to share her love of jazz by giving the chapter titles the names of songs sung by some very impressive jazz artists including Billie Holiday and Ella Fitzgerald, John Coltrane, Billy Strayhorn and Clifford Brown to name a few.

Like Rhode Island Red, Coq Au Vin is an intensely jazz filled book. Jazz is certainly the main narrative that is seen via both Nanette and André and their interactions with each other. This time around one has the added love affair, that of the relationship between Paris and Black Americans. One cannot forget that some of the best jazz musicians for example Miles Davis, Dexter Gordon, Billie Holiday, John Coltrane, Nina Simone, Theolonius Monk and Charles Mingus all spent time in Paris during their lives.

The third book in the series is Drumsticks and after a rather tragic sojourn to Paris, Nanette is back in New York drowning her sorrows metaphorically and figuratively and just about managing to make ends meet. Things start to look up when she receives a Voodoo doll as a present. Could her luck be changing after all? It falls to Nanette to investigate when the lady who sent her the doll is found dead. Who killed her and why? Liking up with some unlikely allies sees Nanette delving into the life of Ida the dead women who had rather a large number of dark skeletons in her cupboard.

Whilst it was great to see Nanette in Paris in the second book in the series seeing her back in her usual haunt of New York was a delight. There was slightly more grittiness in the dialogue (which I loved) which was not so evident in Coq Au Vin, but the descriptions of New York were just as vivid as those of Paris. Charlotte Carter certainly knows how to draw her readers into a city. Her descriptions are profound, lush and very much part and parcel of this trilogy. Again Charlotte Carter does not disappoint us when it comes to her chapter titles, with song titles from the Nat King Cole Trio, Ella Fitzgerald, Charlie Parker, Sarah Vaughan, Horace Silver, John Coltrane, Chet Baker and Dexter Gordon.

Nanette's ability to be ferocious in what she delights in whether it be falling in love with men (decent or not) fine wine and food and of course the best of jazz music and not forgetting her innate ability to solve mysteries is what makes this series amongst the best music inspired series to read.

It is an utter shame that we readers only have a trilogy to read about Nanette Hayes. I certainly wish that there were more. Charlotte Carter not only managed to write a thrilling series with a strong, sexy female character but she also brought jazz to life and enthused this series with jazz music that would delight anyone whether or not the are a novice when it comes to their love of jazz or a longstanding lover of Jazz.

One of the best things of this series which always makes these books worth rereading is the great sense of place, characterisation and the love of jazz and jazz history that flows through the pages. I love the fact that jazz songs are cited, it makes you want to go and seek out all of them, You don't have to be a fan of jazz to enjoy this series but it does help and its incredibly easy to immerse yourself in reading this series with jazz playing in the background.

If you haven't read this series before then do so. They may have been originally published in the 90s but that has not stopped them from being great reads today. Welcome to the world of sexy, sassy Nanette Hayes, who if anything will bring jazz to life as she solves a number of mysteries. Re-reading these have been a joy.