A change of pace for Lindsey Davis 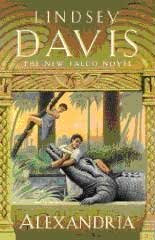 Lindsey Davis latest foray into the historical world will be about the English Civil War. According to Book Trade Info Rebels and Traitors is a departure from her much loved Roman series. The historical novel will tell the story of two different people on different sides of the war and what it is like to have fought on the frontline. Century who also publish her Roman series have acquired the UK and Commonwealth rights. Traitors and Rebels will be published in September 2009.
The most recent book in her Ancient Rome series featuring Marcus Didius Falco is Alexandria and a review can be found here. The twentieth book in her excellent series is due out in June 2010 under the title Nemesis.
And if you want to read SHOTS' interview between Mike Ripley and Lindsey, click here.
Posted by Ayo Onatade at 14:05