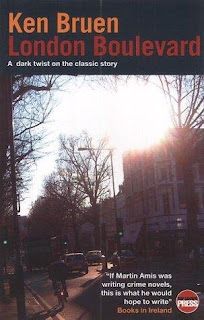 News from my friend David Thompson’s Busted Flush Blog is that Ken Bruen’s London Boulevard will start filming soon with Colin Farrell and Kiera Knightley on board.

Oscar Winner William Monahan (screenwriter of The Departed) is set to direct the film which is due to start filming during the summer.

London Boulevard is the story of criminal known as Mitchell. When Mitchell is released from prison after serving three years for a vicious attack he doesn't even remember, Billy Norton is there to pick him up. But Norton works for Tommy Logan, a ruthless lowlife with plans Mitchell wants nothing to do with. Attempting to stay out of Logan's way, Mitchell finds work at the Holland Park mansion of faded movie actress, Lillian Palmer. But it isn't long before Mitchell's violent past catches up with him. When innocent people start getting killed and his eccentric sister's life is put in danger, Mitchell is forced to act.

If done well London Boulevard will certainly be worth going to see.