Spread the Word: books to talk about have drawn up their short list of 10 from 50 nominated books in their search to find the best book to talk about this year. Votes cast on their website will decide the winner with the announcement being made on World Book Day 2009, Thursday 5 March. Amongst the short list are two crime novels – Bad Traffic by Simon Lewis and Season of the Witch by Natasha Mostert. 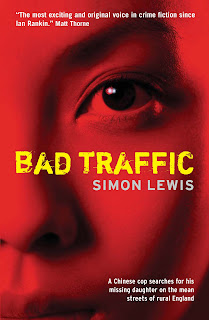 Bad Traffic is the first in a series of crime novels to feature Chinese detective Inspector Jian. It began life as a response to two real life crimes: the death by suffocation of more than fifty illegal Chinese immigrants in a lorry container, and the drowning of the cockle pickers on Morecombe Bay. Lewis combines a unique and moving thriller with the vicious and topical issue of people trafficking. He finds himself not only having to deal with persuasive and nasty killers but in a situation where he is not able to make himself understood properly because of the language barrier.

In Season of the Witch, Gabriel Blackstone is a cool, hip, thoroughly twenty-first century Londoner with a remarkable gift. A computer hacker by trade, he is also by inclination - a remote viewer; someone whose unique gifts enable him to 'slam rides' through the thought processes of others.
But reading people’s minds is something he does only with the greatest lack of enthusiasm that is until he is contacted by an ex-lover who begs him to use his gift to find her stepson, last seen months earlier in the company of two sisters. He soon gets drawn into the lives of two beautiful sisters who are practising witches.

The only other crime novel to make it on to the longlist is Adrian McKinty's excellent book The Bloomsday Dead. The Bloomsday Dead is the final book in the trilogy and follows on from Dead I May Well Be (which was shortlisted for the 2004 Ian Fleming Steel Dagger Award) and The Dead Yard which won the award for won the Audie Award for best mystery or thriller in 2006. In The Bloomsday Dead Michael Forsythe finds himself once more drawn back to Ireland to find a missing girl. It is the only opportunity that he will have to save his own skin.
Posted by Ayo Onatade at 05:33