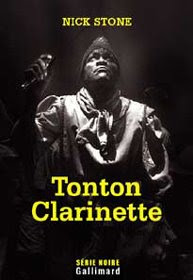 The success of Nick Stone just keeps on rolling. Not only did Mr Clarinet win the CWA Ian Fleming Steel Dagger Award (2006), The International Thriller Writers Award for Best First Novel (2007), The Macavity Award for Best First novel (2007) the book was also nominated for the Barry Award (2007) and the Gumshoe Award (2008). He starts 2009 with a bang. He has just won the PRIX POLAR SNCF (Detective Novel Award) 2009 for the Best Crime Book by a foreign writer for 2009.
Published in France as Tonton Clarinette, it was up against The Square of Revenge by Pieter Aspe and The Hostage by Olav Hergel.
Established in 2000. The 9th edition of the SNCF Thriller prize drew a larger amount of participants than any other readers' prize event in France. No less than 2000 fans of the genre, spread over 12 regional reading groups, worked all year to come up with their final selection.
The awards ceremony will be on 9th February at the Théâtre Le Trianon in Paris, where the European and French whodunit prize winners will be announced.
Posted by Mike Stotter at 13:33