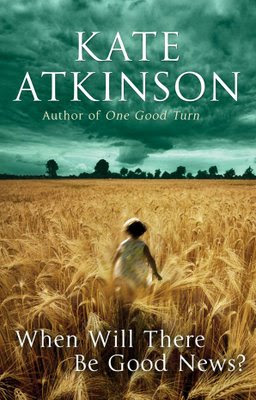 I know I am a little behind in extolling the virtues of Kate Atkinson; however I was pleased to see that her latest Jackson Brodie thriller has hit #2 in the UK Paperback Bestsellers with “When Will There Be Good News?”.

I recently wrote my thoughts about Atkinson’s crime novels at The Rap Sheet, as her three Jackson Brodie novels were the highlights of my Christmas reading.

I have been aware of the critical acclaim and awards Ms. Atkinson has received over the years. But being a genre animal, I had avoided her three crime novels, because she was always pegged as a “literary writer.” That term raises my hairs like the quills on a porcupine. I now realize, much to my embarrassment, that Atkinson’s three crime novels are remarkable feats of plotting and characterization, and that the “literary” edge does indeed add something special, something I’ve not experienced before in such a delightful manner. Discovering her work was, for me, like striking a rich Klondike seam.

It seems that everyone is equally enthralled by Atkinson’s crime-novels, including Shots Columnist Mike Ripley, who wrote –

I have to admit to being a late-comer to the crime fiction of Whitbread Book of the Year winner novelist Kate Atkinson, but my goodness, I’m impressed. When Will There Be Good News? (from Doubleday) is far from a conventional detective novel, even though it involves several detectives and numerous crimes, and it will not appeal to the more conservative crime reader.

But I would urge thriller fans of all persuasions to give it a try, for Ms Atkinson has a truly fascinating approach to plotting as well as a highly intelligent and witty writing style. Is this the shape of crime writing to come? It might just be.

In fact Ripley reviewed “When Will There Be Good News?” at Karen Meek’s Eurocrime website last September -
Kate Atkinson's new novel When Will There Be Good News? (Doubleday, £17.99) is nothing like a conventional thriller, but might just be the crime novel of the year.
This is a book which revels in outrageous plot coincidences and has a huge cast of characters fluttering like moths around the unconventional detective duo of ex-soldier, ex-cop, ex-private eye Jackson Brodie and Edinburgh cop DCI Louise Monroe. Yet their fates and actions are governed by the novel's "victims" including a traumatised female doctor and a gutsy, streetwise sixteen-year-old orphaned girl trying to improve the hand life has dealt her.
Along the way there is murder, kidnapping, extortion, arson, drug-dealing, a considerable amount of violence aimed at women and an awful lot of unsatisfactory marriages. This is not a thriller which delivers comforting, morally-sound resolutions. It is a novel about love, fate, death and the sheer business of getting on with life; written quite brilliantly with cheeky literary references and an eagle eye for human foibles and weaknesses.
Kate Atkinson has pulled off a fantastic trick. With sparkling prose, intelligence and wit, she has shown how clever the crime novel can - and should - be.
The Times interviewed Atkinson in a fascinating feature which illuminates her life and work –
Atkinson, who is in her mid-50s, claims not to write detective fiction, although that's the general direction her novels are moving in: the next one will feature two familiar female characters, Gloria and Louise, at a murder mystery weekend. “I do like secrets in books,” she says, digging into an oversweet pistachio thing. “There have always been mysteries in my books. I don't give that much thought to my books actually. I'd rather talk about cake, or shoes or Posh” - by which she means, presumably, Victoria Beckham.
All right, let's talk about cakes; she and I rhapsodise about Betty's tea room in Harrogate and York. At a literary festival a woman complimented her on the shoes she was wearing, and the usual Q&A about plots and character degenerated into a fashion free-for-all. Today she is wearing a lovely scoop-necked green cardigan and surprises me when, without warning, she produces from the cleft of her bosom a cloakroom ticket. She has a wonderful, wicked laugh and manner - quite unsuited for someone determined to be discreet and withholding.
“I was an only child and read a lot,” she says of growing up in York. “I read Just William, E. Nesbit - the greatest children's writer.” She was “never” a happy child. “You can be a happy adult - I am - not a happy child, or a happy child and not a happy adult. I think I was probably just too solitary.”
Her parents ran a surgical supplies shop. “Even as a small child, I thought that was weird. The other shops sold fairly normal things like bread and clothes. We sold rubber sheeting.”
Atkinson lives in Edinburgh, near her 84-year-old mother, two daughters and grandchildren. “I like my own company,” she says. “I might have been a more sociable child had I had siblings. My father was very sociable, my mother less so.”
She went to universty in Dundee, where she married and almost became an academic, but her doctorate - on the American short story - was refused at its viva. Does she like living alone? “I don't want to live with anyone. I'm having my garden done at the moment and the builders are trailing through the house, which is full of dust, as are my lungs. My whole being at the moment is crying, ‘Leave me alone, leave me alone'.”
Read More

If you’ve been as tardy as I have in catching up with Kate Atkinson, may I indicate that her three crime novels – “Case Histories”, “One Good Turn” and “When Will There Be Good News?” are all out in paperback from Transworld Publishing and are essential reading.
If you don’t trust me, why not see her work rated by Stephen King as one of his best reads of 2008.
Posted by Ali Karim at 12:40