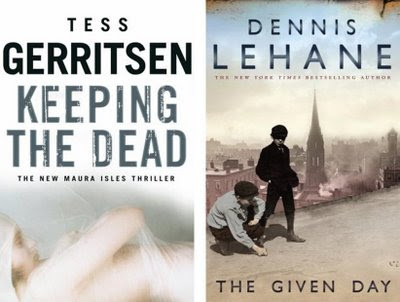 I almost fell off my chair when I got word that two of Transworld’s greatest writers Dennis Lehane and Tess Gerritsen are speaking at Borders Charing Cross Road, London on Thursday 12th February 2009 at 1830 hours.

This date is scrawled in my diary in bold flashing red, as both Dennis Lehane and Tess Gerritsen have been favourite writers of mine for many, many years. I have bumped into Tess several times over the years, while I only recently met Dennis Lehane for the first time last year, despite corresponding with him previously. Lehane’s novel THE GIVEN DAY has received huge praise in the US when it was released last year, while bestselling Gerritsen’s KEEPING THE DEAD continues the adventures of Boston detective Jane Rizzoli and medical examiner Maura Isles and also has garnered huge praise from critics when it was released in the US last year under the title ‘The Keepsake’.

They are over in the UK to talk about their work, so it would be excellent if we can have a good attendance for them. Their respective books are important works that I can not recommend highly enough -

The Given Day by Dennis Lehane
Danny Coughlin is Boston Police Department royalty and the son of one of the city's most beloved and powerful police captains. His beat is the predominately Italian neighbourhoods of the North End where political dissent is in the air - fresh and intoxicating. On the hunt for hard-line radicals as a favour to his father, Danny is drawn into the ideological fray and finds his loyalties compromised as the police department itself becomes swept up in potentially violent labour strife. Luther Lawrence is on the run. A suspect in a nightclub shooting in Oklahoma, he flees to Boston, leaving his wife behind.He lands a job in the Coughlin household and meets Danny and the family's Irish maid, Nora, who once had a powerful bond. As the mystery of their relationship unravels, Luther finds himself befriending them both even as the turmoil in his own life threatens to overwhelm him. Desperate to return to his wife and child, he must confront the past that has followed him and settle scores with enemies old and new. Set at the end of the Great War, "The Given Day" is meticulously researched and expertly plotted, it will transport you to an unforgettable time and place.

Keeping The Dead by Tess Gerritsen [US Title ‘The Keepsake’]
She's Pilgrim Hospital's most unusual patient, and on this Saturday night, a media circus is gathered to record every minute of her visit to the X-ray department. Crammed into the small CT scan room are reporters, TV cameras, a select group of medical technicians - and forensic pathologist Maura Isles. Maura is there because the patient being scanned tonight isn't alive. She's probably been dead for centuries. She is, in fact, a mummy. As the CT scan proceeds, everyone in the room leans in close - and gasps in horror as an image of a bullet is revealed. Maura declares it a possible homicide case and calls in Detective Jane Rizzoli. When the preserved body of a second victim is found - and then a third - it becomes all too clear that not only is a maniac at large but he is taunting them. And that, unless Maura and Jane can find and stop him, he will soon be adding yet another chilling piece to his monstrous collection.

As this is a big opportunity for British readers to listen to two of America’s bestselling writers - so get there early.
Posted by Ali Karim at 14:44

Two of my favourites too! So, SO jealous.