Dennis Lehane - A Life in Writing 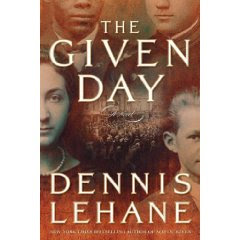 Following on from the interview in the Daily Telegraph last week end there is another excellent interview with Dennis Lehane in today's Guardian (24 January). A Life in Writing.

He talks about his latest novel The Given Day and the length of time that it took him to write. As he says in the interview "I feel like if this bombs, God: it's going to be my Heaven's Gate, my Waterworld". The Given Day which took him 5 years to write is to be the first of a trilogy. He also talks about his series featuring detectives Patrick Kenzie and Angela Gennaro of which has a massive fan base. Lehane is very forttunate with Hollywood. Firstly there was the success of Mystic River which in 2004 was nominated for best picture and also won awards for two of the actors Tim Robbins and Sean Penn. Then there was Gone Baby Gone which was filmed by Ben Affleck and featured Casey Affleck in 2007.The film of course was not released in the UK until 2008 allegedly as a result of the disappearance of Maddie McCann. Fans of the Kenzie and Gennaro series are of course pleased to hear that there will be another one in the series soon. Lehane also talks about his stint writing for the Wire and the fact that it seemed to be a daunting task. The interview is certainly worth reading and is illuminating about his writing as it is about what makes him tick.

Dennis Lehane will be at Borders Charing Cross Road on 12 February 2009
Posted by Ayo Onatade at 21:31