Danny Miller - Kiss Me Quick: The Thrill of It! 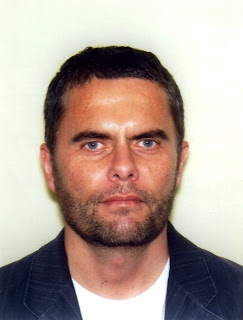 Today’s guest blogger is Danny Miller. He is a big fan of film noir. He studied dram and English at Goldsmith’s College in London and has had a number of his plays performed National Theatre Studio, Bush Theatre, and Theatre Royal Stratford East. As a scriptwriter he has worked for the BBC, ITV and Channel 4. Below he talks about his debut novel and how it all came about.

Kiss Me Quick is the first in a planned series of 1960’s set crime novels featuring the young detective Vince Treadwell. It has been shortlisted for the CWA John Creasy New Blood Dagger 2011.

Kiss Me Quick was my first novel, but I wasn’t a total stranger to hammering the keyboard and tearing my hair out at the thought of a blank screen. I started my writing career as a playwright - although career is a very a grandiose term - then moved to screenplays and scriptwriting for TV. But it was always the novel that I held in the highest esteem. All the writers I really admired were novelist, from Dashiell Hammett, Raymond Chandler, James Ellroy, Elmore Leonard, Bellow, Doctrow, Wodehouse, Conrad, Delilo, Amis, P.D. James, Conan Doyle, Ross Macdonald, Dennis Lehane, and so many more; that said, as scriptwriters who penned The Wire and The Sopranos are also writing heroes. But to be honest I’d had it with scriptwriting. I was burnt out and bored with it and what I was writing just didn’t feel like me. So my plan was simple: to write a book, one last hurrah, and if it didn’t pan out, then find a new profession, something with lots of fresh air and wide open spaces that didn’t involve sitting at a desk hammering on a keyboard and tearing my hair out.

As I started the book I told myself that I was writing it for myself, purely for my own enjoyment. I told myself this mainly to protect myself from disappointment, because I knew how hard it was to get published, and how much luck you needed. But I wanted a crack at it anyway, and I had a firm belief that writing a novel was a win-win situation. If you love writing and you choose prose as your medium, even if you don’t get published, you still have a book. It exists, it is a thing within itself, the story is on the page, whether it’s between a publisher’s covers or just a loose manuscript, someone can pick it up and waste a few hours with it and hopefully enjoy it. With a stage play, or a screenplay, it’s a blue print that needs actors and directors and whole lot of other people to give it life.

I knew crime paid. I knew people read it. And I knew deep down that it was the genre that had always appealed to me the most. I’m huge fan of film noir, movies such as Kiss Me Deadly, Kiss of Death, The Killer’s Kiss, Kiss the Blood off My Hands, A Kiss Before Dying…Note the use of the word Kiss in all those titles, so my title was obvious, Kiss Me Quick. It was a nod to the hardboiled books and noir movies I loved, and a nod to Brighton, the seaside town I grew up in and set my story in. I had the seed of the story for Kiss Me Quick long before I started writing it. I’d written a play called Jack’s Out that was on at the Bush Theatre in London, it was about two brothers who were petty villains in Brighton. One brother was good, one was bad, and both were in big trouble with a major villain called Jack Regent who was on the loose. The story always stuck with me, and I’d rewritten in my head many times and come up with lots of new twists and turns. One of the brothers was now a cop and he became my protagonist, on the hunt for the gangster Jack Regent, and faced with sending his brother to the gallows - 1964 the last year of hanging.

I decided to set Kiss Me Quick and all the subsequent Vince Treadwell books (fingers crossed) in the 60’s. It’s before my time, but it’s an era that appealed to me because I think England was at its best. Although no longer a power on the world stage, we were exerting ourselves in other ways, culturally, through music and film and fashion. It was also a time of classic gangsterism and big heists, and I think it’s an era we all know and doesn’t need too much explaining. Plus I loved the whole Mod culture and aesthetic which features heavily in the book, when they ruck with the Rockers on the beach - Vince gets caught up in it unintentionally getting mistaken for a Mod. So the era and clothes were apposite to the way I wanted Vince Treadwell to look and be: a handsome young guy in a sharp suit that’s not afraid to use his fists as well as his wits to get the job done. I didn’t want to write about a middle aged slouch with a drink problem wandering around just asking questions and finally getting the case solved, but with very little action. 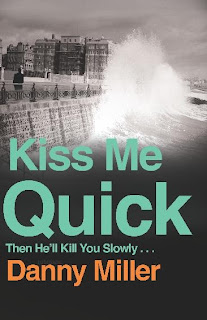 No matter how much you tell yourself you’re writing the book for yourself, of course, you still want to see it on the bookshelves. 2008 was a bad time to be sending it out, the world was in financial meltdown and we needed another crime writer like we needed another banker. I’d finished the book, but the second half needed another draft, I reckoned it needed about three weeks worth of work to get it just right. So I decided to try some agents. I hand delivered my three very polished sample chapters and a covering letter to some agents in central London, all within walking distance of each other, hoping to save on postage, and to smile at some receptionists and hopefully strike up a conversation – anything to get an edge. I then got back to work giving the second half of the book another draft, and forgetting about the agents. I’d read somewhere that I’d lounging on the agents slush pile for a couple of weeks before it got read, so I had plenty of time to completely finish the book. Three days later I got a call from an agent at David Higham Associates saying they’d read the three chapters and wanted more. I said give me three weeks. They did. Then they got more. And I got an agent and the book went out.

But there was a problem; I had killed off my protagonist Vince Treadwell. The agent and my now editor at Contstable & Robinson liked him, they wanted him to live, he was too young to die (24). And they were right. Killing your off your hero in book one, even if you have other books with different characters up your sleeves, is a wrong move on so many levels; and funnily enough not just the financial or commercial ones. Killing Vince off just didn’t provide a satisfying ending. Remember the movie, Von Ryan’s Express? The hero doesn’t make the train and dies. It’s a film I can’t watch again, somehow unsatisfying. Ring of Bright Water, the otter gets chopped in half in a ditch; kids came out the cinema crying. Sure Bambi’s mum cops for it, but Bambi lives! Now I’m not saying everyone should live. Looking at the great tragedies, King Lear dies, but his death brings harmony and a satisfying conclusion. Hamlet dies, but frankly the wavering wimp had it coming from Act 1. But my favourite, Oedipus, probably the first great detective story and the greatest tragedy ever written, he lives! He lives to sit and ponder his hubris and fate. Raymond Chandler called his books tragedies but with happy endings - because Marlow, his hero, lives. So I changed the ending – but really there wasn’t that much to change, it was just a tweak, about the size of a bullet. So if you’re in a mind to read the book, I won’t spoil the ending, but Vince, the hero, lives. I know he does because I’ve just finished the follow up book, The Gilded Edge.

Kiss Me Quick has been shortlisted for the CWA John Creasy New Blood Dagger, and I’m overjoyed about that. I won’t deny it’s a great feeling to be up for this award. As a writer you hope you’ve written a good book, after all, no one sets out to write a bad book (apart from the postmodernists), but you never know. And whilst being shortlisted for an award doesn’t necessarily mean that you have written a good book, it does mean that someone, somewhere, has liked it at some time, and that’s just about as good as it gets. I’ve also got to say that in the brief time I’ve been in the crime writing game, and been to events like Bristol Crime-Fest and the Harrogate Festival, it seems like a generous and fun community with a real passion for the genre.

The second book, The Gilded Edge comes out in 2012, and sees Vince Treadwell up to his neck in murder and corruption, mixing with some real characters from the 60’s, the black Notting Hill gangster turned Black Power activist, Michael X; the self styled ‘Boss of Britain’s underworld, Billy Hill; and a group of powerful blue bloods and power brokers who gambled fortunes away at an exclusive Berkeley Square casino. I had as much fun writing this book as I did Kiss Me Quick; so maybe the new job with the fresh air and wide open spaces will have to wait, and I’ll carry on hammering the keyboard and tearing my hair out for a little while longer.

All the best
Danny
Posted by Ayo Onatade at 11:08