MacLehose Press are delighted to announce that a special, leather and stud bound, one-off boxed set edition of the MILLENNIUM TRILOGY will be auctioned at Sotheby’s on the 15th Dec to help raise money for Stieg Larsson’s magazine, Expo.

The Boxed set includes the letter of rejection from the Joint Committee of Colleges of Journalism in Stockholm to applicant 493 [Stieg Larsson] and features a charming doodle by Stieg Larsson on the back of the letter.

Christopher MacLehose will be presenting the Boxed Set to fellow international publishers of the Millennium Trilogy at Frankfurt tomorrow evening, at a dinner being hosted by Norstedts – at which Stieg Larsson’s brother, Joakim Larsson, will be present. This will be the last time members of the public will see the actual set before it goes on auction on the 15th Dec.

Sotheby’s arranged for The Guardian to run an exclusive feature about the special edition boxed set on Saturday: http://www.guardian.co.uk/uk/2011/oct/08/stieg-larsson-rejection-letter-auction

Sotheby's London To Offer A Spectacular, Unique Boxed Set of Stieg Larsson's Celebrated Millennium Trilogy, Including A Never-Before-Published Pencil Drawing by Stieg Larsson
and A Personal Document -In His Possession Until His Death – The Author’s Original Rejection Letter from Journalism School. 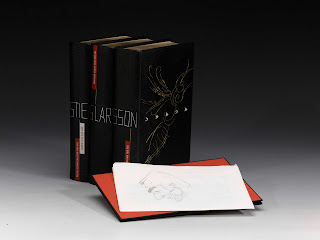 Unique boxed set of Stieg Larsson's Millennium Trilogy, including the original letter of rejection from the Joint Committee of Colleges of Journalism and an original pencil portrait by the author, est. £8,000-12,000

SOTHEBY'S LONDON, Monday 10th October 2011, is delighted to announce the sale of a unique, exquisitely leather-bound boxed set of Stieg Larsson's internationally bestselling and award-winning Millennium Trilogy as part of the English Literature Sale on 15th December 2011. Estimated at £8,000-12,000*, the one-of-a-kind set, comprising The Girl with the Dragon Tattoo, The Girl Who Played with Fire and The Girl Who Kicked the Hornet's Nest, includes the original letter of rejection sent to a young Larsson in 1972 by the Joint Committee of Colleges of Journalism. Larsson kept this letter among his personal possessions until his death, and it reveals, overleaf, an original pencil portrait by the author himself which has never before been seen by the public. Stieg Larsson's drawing skills are well documented, but his drawings have not previously been published. This document has been donated by the author's family specifically to be included with this boxed set, the sale of which will benefit Expo, the anti-discrimination foundation set up in 1995 by Larsson and his peers. Larsson served as president of the foundation as well as editor-in-chief of Expo magazine until his death in 2004. 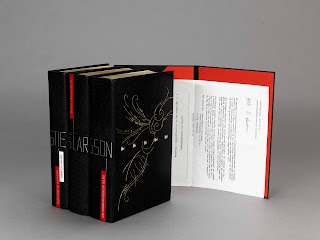 The Estate of Stieg Larsson, namely Stieg Larsson's father and brother, comment on the sale: ‘We are greatly impressed by this beautiful one-off binding of The Millennium Trilogy, intricately designed to reflect the contents of the books. It is not only a collector's piece that can be described as an homage to the publishing phenomenon that Stieg's books became following his death, but very importantly its sale will benefit an organisation he believed in deeply. It gives Stieg's brother and myself great pleasure to know that Expo will benefit from funds that will enable the foundation and magazine to continue their hugely important work.’ 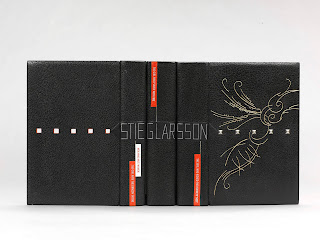 The brainchild of Mark Smith, CEO of Quercus Books -whose MacLehose imprint is Larsson's UK publisher -this unique boxed set was designed and realised by the esteemed British bookbinders Sangorski & Sutcliffe. Sangorski & Sutcliffe's chief designer Eri Funazaki executed the design concept by bindings director Alison Strachan. Bound in crushed black Morocco leather, the books interlock with a row of five silver studs which fit into red grooves on the corresponding cover they are placed against, and each volume displays gilt designs on their upper covers illustrating the themes contained within the text. The books' spines are etched with silver to form the author's name across the three volumes when placed together, and each of the books is gilt-edged, with the insides of the covers revealing scarlet endpapers. The boxed set also includes a reproduction by artist Emily Faccini of the map originally drawn by Stieg Larsson of his fictional Hedeby Island. 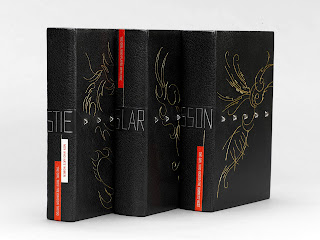 ‘The colour scheme of red and black seemed appropriate to the violence and darkness of the subject matter,’ Strachan reflects, ‘and the hand-tooled designs of each front cover were designed to echo the images of the titles and the tattoos that cover Lisbet . . . The studs were a manifestation of the sado/masochism of some of the male characters [and] the way the studs fit into the cover of the next book was a symbol of how the protagonists work together, their close relationship which is intrinsic to how each of the books relates to the other.’

Expo is a non-profit, private, religiously and politically unbiased foundation established in 1995 at the initiative of, among others, journalist and author Stieg Larsson, who served as editor-in-chief of Expo magazine and president of the Foundation until his death 2004. Expo's mission statement aims to ‘counteract the growth of the extreme right and the white power-culture in schools and among young people,’ and to safeguard democracy and freedom of speech against racist, right-wing extremist, islamophobic, anti-Semitic and totalitarian tendencies throughout society. The Expo Foundation carries out editorial and opinion-forming work and is run by the editorial staff, consisting mostly of volunteer journalists. Expo also gives lectures and informs on the Swedish and European extreme right for, among others, teachers, politicians and journalists.

The celebrated Scandinavian writer was, during his lifetime, renowned in Sweden as a campaigning journalist and dedicated political activist, a polymath who counted photography and science fiction among his avid interests. Stieg Larsson was a political journalist and graphics specialist for 20 years at a Swedish news agency but also conducted extensive independent research on right-wing extremism in Sweden, culminating in the 1991 publication of his first book, Extremhögern (Right-Wing Extremism). The book made him an instrumental figure in the documentation and exposure of Swedish extreme-right and racist organisations particularly of the Sverigedemokraterna (Sweden Democrats) -as well as a prominent lecturer on the subject. His committed involvement in anti-discrimination campaigns, as well as journalistic expertise, led him to establish in 1995 the Swedish Expo Foundation -an organisation similar to the British Searchlight Foundation where he served as editor of its magazine, Expo.

Larsson worked tirelessly, and for long hours into every night, at Expo to fight fascism and racism in Sweden and Europe. He lectured at inter-governmental seminars in Brussels, contributed over many years to the campaigning British magazine Searchlight, and he answered every call to the organisation from victims of racism and anti-Semitic harassment and violence. He went to schools to help children who were being racially bullied and talked to the headmaster or headmistress, to classes and told the victims that he was available to come back at any time if need be.

Larsson's strident beliefs resulted in many years of death threats levelled at himself, his family and colleagues. Targeted by neo-fascists, Larsson and his partner of many years were forced to live a life of acute anxiety. Their names and their address were published by their aggressors, while another man, similarly targeted, was murdered under the noses of a police surveillance team. Yet Larsson never stopped making his encyclopaedic knowledge of the Swedish and international far-right available to everyone who needed to learn from it.

To the sheer amazement of his friends, the multi-talented Larsson also found time to write novels for his own enjoyment. He was an expert in the crime-fiction genre and corresponded with some of its most illustrious authors. It was only at the urging of his friends that Larsson sent a draft of his first novel to the Swedish publishing company Norstedts. However, the only fragment of the huge success that his books later found was the deal his publisher made with Heyne in Germany in 2004, through which he secured an impressive advance payment. It gave him, he decided, the opportunity to change his punishing way of life, and also the chance to put money into Expo, but it was only shortly after this that Larsson passed away suddenly. The lift in his office was out of order that day, and after climbing the seven flights of stairs to his office he suffered a massive heart attack. He was 50.

Since its first publication, almost 65 million copies have been sold worldwide in almost 50 countries, with 7 million copies sold in the Nordic countries alone. Inspired by his lifelong loathing of sexual violence towards women, as well as his experience as a journalist and editor, Larsson wrote and submitted the manuscripts of the first three (of what was intended ultimately to be 10) novels in the Millennium series to various publishers before his sudden death. The original title of the first volume was Men Who Hate Women (as translated from Swedish); Larsson dedicated his life to fighting all forms of discrimination, but felt a particular abhorrence towards the abuse of women. Swedish publisher Norstedts accepted them for publication, but an English language publisher proved difficult to find until Christopher MacLehose bought the rights for his embryo list, The MacLehose Press, an imprint of the then small independent London publisher Quercus.

The crime thriller follows the fascinating Lisbeth Salander, a highly intelligent and introverted young woman with a troubled past. She is an expert computer hacker, and uses her skills to conduct investigative work. When assigned a cold case with investigative journalist Mikael Blomkvist, a complicated romantic relationship blossoms between the two. Together they expose the criminal activities of Swedish establishment figures, and when Salander is accused of murder, Mikael battles to exonerate her -mostly against her wishes; shadowy figures from Salander’s traumatic childhood emerge in the thickening plot, leading to tampered psychiatric records, a disputed inheritance, sex trafficking and mafia activity, with Blomkvist and Salander continually confronting violence and high-adrenaline chases to end the saga once and for all.

The highly anticipated Hollywood film adaptation of The Girl with the Dragon Tattoo, starring Daniel Craig and Rooney Mara, will premiere on 21st December 2011 (in North America). This production follows the critically acclaimed Swedish-language film adaptations of the trilogy, released successively in February, September and November of 2009 by Yellow Bird, the Swedish film and TV production company.

* Estimates do not include buyer's premium

In addition to this, the highly anticipated Hollywood film adaptation of The Girl with the Dragon Tattoo, directed by David Fincher and starring Daniel Craig and Rooney Mara will be in UK cinema’s across the country on the 26th December 2011. The jacket artwork of the film tie-in edition has just come in and has been approved by Sony UK.

Film tie-in editions will be available in stores across the UK from the 27th October. 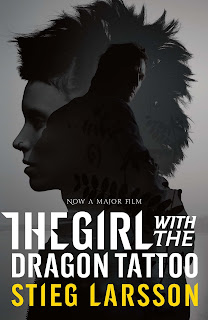