Forthcoming books to look forward to from Faber & Faber

It's Detroit, 1971. Harry Levin, scrap metal dealer and holocaust survivor, learns that his daughter has been killed in a car accident. Travelling to Washington DC, he's told by Detective Taggart that the German diplomat,who was drunk, has been released and afforded immunity; he will never face charges. So Harry is left with only one option - to discover the identity of this man, follow him back to Munich and hunt him down. The first of a two-hander, Peter Leonard's new novel is a classic cat-and-mouse thriller. Told with swagger, brutal humour and not a little violence, it follows a good man who is forced to return to the horrors of his past. Voices of the Dead is due to be published in January 2012

Driving home from a party with his girlfriend and brother, all of them drunk and high on stolen pills, Billy Blackmore accidentally hits someone in the night. In a panic, they all decide to drive off. But the next day Billy wakes to find he has to cover the story for the local paper. It turns out the dead man was Edinburgh's biggest crime lord and, as Billy struggles with what he's done, he is sucked into a nightmare of guilt, retribution and violence. From the author of the acclaimed "Smokeheads", "Hit & Run" is another pitch-black psychological thriller. Hit & Run is by Doug Johnstone and is due to be published in March 2012.

Death in the Sun is by Adam Creed and is due to be published in June 2012. In Almagen, a small village in the Andalucian mountains, Staffe nurses himself back from the brink of death. His idyllic new life in Spain appeals and Staffe is becoming a part of the community. One day his friend, Manolo, takes Staffe to visit Almeria and tells him about a body that has been found buried in an old greenhouse by the Mediterranean. Staffe becomes inexorably drawn to the case and befriends a journalist, Raul, who presents the killing as a simple case of drug-trafficking gone wrong, but it soon emerges that this murder mirrors the methods of torture used during Spain's brutal civil war. When Raul plunges to his death in a drunken car crash, Almagen’s own secret past slowly rises to the surface, bringing with it family feuds and an expatriate ménage of a famous British artist, a Vietnam war vet, and a beautiful German heiress. Between the sierra and the sea, everyone seems to want to bury the past – except Staffe, who's new life is threatened as he refuses to abandon his investigation. Once unearthed, the past refuses to go away and the closer the unseen enemy gets, the more Staffe’s own past haunts him – torn and trapped by two so different worlds, and closer than ever to the man who murdered his parents.

"A Dark Redemption" introduces DI Jack Carrigan and DS Geneva Miller as they investigate the brutal rape and murder of a young Ugandan student. Plunged into an underworld of illegal immigrant communities, they discover that the murdered girl's studies at a London College may have threatened to reveal things that some people will go to any lengths to keep secret...Unflinching, inventive and intelligent, "A Dark Redemption" explores a sinister case that will force DI Carrigan to face up to his past and DS Miller to confront what path she wants her future to follow. A Dark Redemption is by Stav Sherez and is due to be published in February 2012.


Siberian Red is the third book in the Inspector Pekkala series by Sam Eastland and is due to be published in February 2012 It's September 1939. The Second World War has begun. Even as the fighting rages in, Stalin's long time obsession with the missing treasure of Tsar Nich

olas II is rekindled. An informant claims to have information about the whereabouts of the man entrusted by the Tsar with hiding his gold. As the news of the informant reaches Stalin, however, the man is knifed to death. Stalin summons Pekkala to the Kremlin and orders him to solve the murder. To accomplish his mission, he must return to Borodok, the notorious Gulag where he himself spent many years as a prisoner. There, he must pose as a inmate in order to unravel the mystery ...As he returns to the nightmares of his past, is this a mission too far for the great Pekkala?

It's summer, 1936. The writer, Josephine Tey, joins her friends in the holiday village of Portmeirion to celebrate her fortieth birthday. Alfred Hitchcock and his wife, Alma Reville, are there to sign a deal to film Josephine's novel, "A Shilling for Candles", and Hitchcock has one or two tricks up his sleeve to keep the holiday party entertained - and expose their deepest fears. But things get out of hand when one of Hollywood's leading actresses is brutally slashed to death in a cemetery near the village. The following day, as fear and suspicion take over in a setting where nothing - and no one - is quite what it seems, Chief Inspector Archie Penrose becomes increasingly unsatisfied with the way the investigation is ultimately resolved. Several years later, another horrific murder, again linked to a Hitchcock movie, drives Penrose back to the scene of the original crime to uncover the shocking truth. "Fear in the Sunlight" is the fourth detective novel following the life and work of Golden Age writer, Josephine Tey by Nicola Upson and is due to be published in April 2012

Baghdad 1917. Captain Jim Stringer, invalided from the Western Front, has been dispatched to investigate what looks like a nasty case of treason. He arrives to find a city on the point of insurrection, his cover apparently blown - and his only contact lying dead with flies in his eyes. As Baghdad swelters in a particularly torrid summer, the heat alone threatens the lives of the British soldiers who occupy the city. The recently ejected Turks are still a danger - and many of the local Arabs are none too friendly either. For Jim, who is not particularly good in warm weather, the situation grows pricklier by the day. Aside from his investigation, he is working on the railways around the city. His boss is the charming, enigmatic Lieutenant-Colonel Shepherd, who presides over the gracious dining society called The Baghdad Railway Club - and who may or may not be a Turkish agent. Jim's search for the truth brings him up against murderous violence in a heat-dazed, labyrinthine city where an enemy awaits around every corner. The Baghdad Railway Club is by Andrew Martin whose novels have been short-listed for the Ellis Peters Historical Award and the CWA Dagger in the Library. The Baghdad Railway Club is due to be published in June 2012 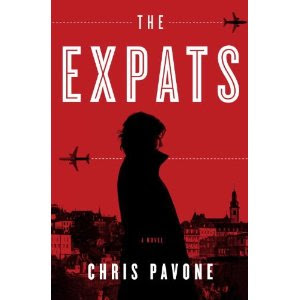 The Expats is the debut novel by Chris Pavone. When her husband accepts a new job in Luxembourg Kate Morrow thinks she is leaving her top-secret life in the CIA behind. It’s the perfect opportunity for her family to start again as expatriates in a genteel, European city with a new home, new friends and a new life. But when Kate and her husband, Dexter, are befriended by another American couple, Julia and Bill, Kate can’t help but sense that they may not be who they say they are. Charming and sociable, they are also vague about their past in ways that Kate, as ex-CIA, knows intelligence operatives have to be. With Dexter immersed in work – where he is developing a top secret banking security system – Kate is left to try and unravel the deception for herself.