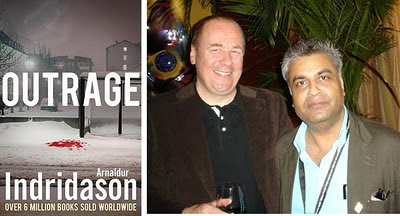 At Bouchercon Indianapolis in 2009, I was asked by to accept the Barry Award [from Deadly Pleasures Magazine] for The Draining Lake on behalf of the Icelandic writer Arnaldur Indriðason, one of my favourite writers of police procedurals. I’m not the only one who rates the softly spoken giant of Icelandic literature, as he has won many awards including the CWA Gold Dagger. The reason why Arnaldur asked me was because we met first at the CWA Dagger awards in London, where he won the Gold for ‘Silence of the Grave’ [raising some controversy which ultimately resulted in the CWA creating a new award category ‘International / Translated Dagger’]. Following the Gold Dagger win for ‘Silence of the Grave’ in 2005, I went onto read and review his work with much enthusiasm, such as Jar City, Voices, and finally sitting down and drinking with him at Bouchercon Baltimore in 2008, as I consider his work right at the top of the genre.

So nervously in 2009 at Bouchercon Indianapolis, I read out his letter of acceptance for the Barry Award as Arnaulder was unable to attend the event -

I am deeply honoured to be awarded the Barry Awards for The Draining Lake. It is not long since we started writing about the macabre world of crime in Iceland on a regular basis so we are a bit of a newcomers to the genre. But I think we have been quick to learn and catch up with all the great things that are happening in that field and bring to it something new along the way. To receive the Barry Awards is I think a testament to this. Thank you very much, thank you - Arnaldur Indriðason

His latest novel ‘Outrage’ is one that really ‘knocked me for six’ as my review at Shots indicates -
It is the way Indriðason conveys empathy with the use of language that makes them an existential and cerebral read. There is one scene, only a couple of paragraphs in length that will burn itself into the mind. It involves the case of a car that is hit by a truck in what was reported as a tragic accident; one that killed the car-driver. Elinborg however soon uncovers something far more sinister; and morally troubling when she tracks down the truck-driver [Ragnar Thor] who gave up his profession following the incident. He tells Elinborg chillingly –

“If I tell you what I left out of my statement, you mustn’t tell anyone else.”
“I won’t. You can rely on me.”
Ragnar Thor finished filling the car. They stood by the pump. It was midday, a chilly day. “It was suicide,” said Ragnar Thor.
“Suicide? How do you know?”
“You can’t breathe a word of this.”
“No.”
“He smiled at me.”
“Smiled?”
Ragnar Thor nodded. “He was smiling when the lorry hit him. He picked me out – my rig, because it was a big juggernaut with a trailer. He pulled over right in front of me, no warning. There was nothing I could do. I had no time to react. He steered his car head-on into me and just before the vehicles collided he smiled – from ear to ear.”

As perplexing as that extract is in painting a picture in your mind, when you understand the context, then you will truly understand how much of an ‘event’ is the appearance of one of Arnaldur Indriðason’s novels into English, and why his work has such insight into the hidden recesses of what we term ‘the human condition’. Simple spoken, the best, of the best.

I was delighted to learn that Arnaldur Indriðason is one of the guests of honour at the Frankfurt Book Fair, which has a market focus on Iceland and its writers including Yrsa Sigurdardottir who with her latest work ‘The Day is Dark’ reflects Iceland’s backdrop as a mysteriously isolated world -

The isolation of the area is reflected in the aloofness of the people whose way of life is under threat and whilst it is difficult to like some of the inhabitants of Kaanneq there is sympathy for them. The Day is Dark is at times dark and unsettling, dealing with alcoholism within the isolated community, the consequences of the lack of respect for the beliefs of the indigenous people and the challenges of being different in a restricted community. As with the other books in this series there is humour and warmth. Atmospheric, complex and compelling with an unexpected ending.

So with Arnaldur’s visit to Frankfurt, there is a very interesting interview with this lyrical and melancholic writer -

“I haven't really read that much of it. I just buried myself in the books that children and adolescents read, and upgraded as the years passed. The first film I remember seeing, I must have been three at the time, was Little Caesar with [Edward G.] Robinson. He plays a crook in Chicago and I remember one or two things from that. That could have been the beginning of things. Later I wrote a piece at school called On the Way to School. Its idea was that some children walked past a place where a violent crime was being committed. When I am contemplating writing a book, it is usually in this crime fiction genre and I don't really know why.

The obvious explanation is that Icelanders had not succeeded in creating any kind of tradition of crime fiction writing. Such books were published at ten-year intervals and hardly looked at – they were considered odd. Writers didn't consider crime fiction to be a challenging art form, they looked to [Halldór Kiljan] Laxness, a great and formidable writer. The other view was that there weren't enough crimes committed in Iceland to provide a basis for a whole book to seem realistic and believable. Iceland wasn't that sort of a country. But this was a complete misunderstanding, as has become clear.

These two things were very inhibiting, there was something missing from the flora, but at the same time the fact that these books didn't exist aroused interest. So you had to create something new, with a beginning, a middle and an end – and a plot. It had to be a strong construction that didn't leave any loose ends, and with a narrative structure. Writing a series about Erlendur hadn't occurred to me, but I wanted to create an interesting character who cared about people, and then put him into unusual and dangerous circumstances. These are not superheroes or superhuman people who can deal with anything, but ordinary people like you and me who unfortunately find themselves in the middle of chaos.
This is what I set out with. In the second book Dauðarósir (Silent Kill), Erlendur had become a very interesting character and by then I had decided to create a series round him.”