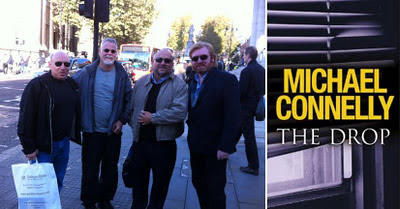 The release of a Harry Bosch novel by Michael Connelly is an event, and at Shots Ezine we’ve been long time followers of the dark investigations that Bosch has had to traverse over the years. Coming shortly is the 17th novel in the series THE DROP –

Harry Bosch has been given three years before he must retire from the LAPD, and he wants cases more fiercely than ever. In one morning, he gets two.

DNA from a 1989 rape and murder matches a 29-year-old convicted rapist. Was he an eight-year-old killer or has something gone terribly wrong in the new Regional Crime Lab? The latter possibility could compromise all of the lab’s DNA cases currently in court. Then Bosch and his partner are called to a death scene fraught with internal politics. Councilman Irvin Irving’s son jumped or was pushed from a window at the Chateau Marmont. Irving, Bosch’s longtime nemesis, has demanded that Harry handle the investigation. Relentlessly pursuing both cases, Bosch makes two chilling discoveries: a killer operating unknown in the city for as many as three decades, and a political conspiracy that goes back into the dark history of the police department.

Click Here for Michael Connelly talking about The Drop on video

Incidentally, if you want to get an interesting set of three Harry Bosch short stories in the e-Book Collection SUICIDE RUN, click here as it is less that £1 and downloads as fast a round from Bosch’s sidearm.

In “Suicide Run,” the apparent suicide of a beautiful young starlet turns out to be much more sinister than it seems. In “Cielo Azul,” Bosch is haunted by a long-ago closed case — the murder of a teenage girl who was never identified. As her killer sits on death row, Bosch tries one last time to get the answers he has sought for years. In “One Dollar Jackpot,” Bosch works the murder of a professional poker player whose skills have made her more than one enemy.

This collection is available now in the US, Canada, the UK, Ireland, Australia, and New Zealand. Get the second collection: Angle of Investigation.

Incidentally I recall ‘One Dollar Jackpot’ vividly as it was shortlisted for the CWA Dagger Award in the Short Story Dagger 2008, as I was one of the judges in a hotly contested shortlist.

Michael arrived in London at the weekend with his two friends [and colleagues of Detective Harry Bosch], the Florida based scientists Larry Gandle [Assistant Editor of Deadly Pleasures Magazine] and Ignacio Ferras. Both Gandle and Ferras were scientific advisors for Connelly’s remarkable novel The Overlook, which first appeared in a serialized form. The two scientists surreally found themselves as characters working alongside Bosch, uncovering a threat to ‘Homeland Security’ in The Overlook. Though being a partner to Harry Bosch does come with a price, as Ignacio ‘Iggy’ Ferras found out in the follow-up 9 Dragons. I did my best to shield Larry Gandle from a similar fate, over the weekend, while Connelly smiled at my bodyguard antics.

On Friday evening, Mike Stotter, Roger Ellory and I met Larry and Ignacio for dinner, reliving some of our adventures at Bouchercon St Louis. The following day, we all met up with a jet-lagged but cheery Michael Connelly at his hotel, as he arrived late the following evening. Mike Connelly treated us to Breakfast, before we headed into London’s West-End and ended up at Goldsboro books, where Roger Ellory signed early copies of his novel ‘Bad Signs’ which incidentally is released next week, as is Michael Connelly’s THE DROP. So after a short stroll to Trafalgar Square where the US NFL had erected giant screens. Roger Ellory and I then left the three men from Florida to enjoy the delights of London, thanking them for bringing the sun with them.

It appears that Michael Connelly, Larry Gandle and Ignacio Ferras had come to London in order to support their US NFL Team, Tampa Bay Buccaneers who were taking on the Chicago Bears at Wembley Stadium; which was a designated day of relaxation before Michael embarked on a promotional tour of the UK and Ireland for THE DROP.

If you get a chance I urge you attend one of the events, because Connelly’s insight into the genre, most revealing -

Thursday 27 October, Belfast, Northern Ireland
7pm Talk and signing with No Alibis Bookshop at the Ulster Museum.
Call 028 9031 9607 for details.

If you’ve not read Michael Connelly, you need to catch up fast, as the Harry Bosch novels are masterworks of the police procedural genre.