Penguin to publish The Pursued by CS Forester 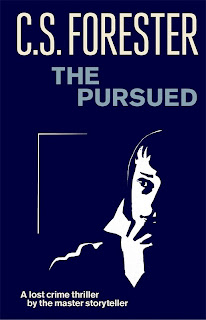 The Pursued, C. S. Forester's dark, twisted tale of murder, lust and retribution, was written in 1935, but its typescript manuscript was lost. More than seven decades later, it has now been rediscovered and is published for the first time. It is a novel years ahead of its time; rewriting the traditions of crime fiction to create a gripping psychological portrayal of obsession, jealousy, torment and the grim underside of suburban London life. The Pursued will be published by Penguin as a Peguin Modern Classic on 3rd November 2011.

Marjorie had never seen a dead body until she got home one tranquil summer evening and found her sister Dot lying on the kitchen floor in a pretty dress, with her head in the oven. She looked peaceful, as if she was asleep. Their mother suspects, however, that Dot's death was far from natural. What's more, she knows who the killer is - and she is determined to make him suffer. So slowly and meticulously, she plots her revenge. After all, who would suspect a neatly dressed, grey-haired widow of anything? And what could possibly go wrong?

1935
The young CS Forester leaves Hollywood where he has been writing a film script. On the sea-journey back to England he writes the first Hornblower novel.

Back in England he writes The Pursued. He sends it to his publishers, Michael Joseph, in London and Boston and it is accepted for publication.

He decides it would not be fitting for The Pursued to be published between the two Hornblower books and asks his publishers in London and Boston to delay publication.

1967
Long Before Forty, CS Forester’s autobiography is published. About The Pursued he writes; ‘The lost novel was really lost. It is just possible that a typescript still exists, forgotten and gathering dust in a rarely used storeroom in Boston or Bloomsbury.'

2002
The typescript is bought at auction by the two founder members of the C.S.Forester society, Dr Colin Blogg and Lawrence Brewer. The identity of the vendor has been withheld.

2010
After discussions with the estate and agent, it was agreed to publish The Pursued as a Penguin Modern Classic.

Cecil Scott Forester was the pen name of Cecil Louis Troughton Smith (27 August 1899 - 2 April 1966), who rose to fame with the 11-book Horatio Hornblower series, depicting a Royal Navy officer during the Napoleonic era, and The African Queen (1935; filmed in 1951 by John Huston). His novels A Ship of the Line and Flying Colours were jointly awarded the 1938 James Tait Black Memorial Prize for fiction. He began his career with the crime novels Payment Deferred and Plain Murder, now reissued in Penguin Modern Classics along with The Pursued.