Joy Ellis on Being Shortlisted

After several failed attempts to explain what this shortlisting meant to me, I decided that writing a whole novel was considerably easier! Whatever I said seemed either over the top, or insufficient, and all I wanted to do was tell you how I felt! I’ll try again...

When my publisher, Joffe Books, told me that they had nominated me for The British Book Awards, I was bowled over, and also humbled that they should consider my book, The Patient Man, good enough to put forward. At the time I never really thought any further than that. Some while later I had an email with the header, Top Secret! Intrigued, I read on. We could tell no-one, it was embargoed until an official announcement was made, but I was on the shortlist! Even then it didn’t sink in. I was absolutely delighted, of course, but believed I might be one of many. Then the list was revealed, and I saw six names, Ian Rankin, Lee Child, Lucy Foley, Richard Osman, Robert Galbraith (aka JK Rowling) and me! 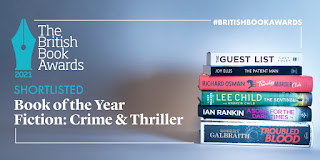 My publishers were over the moon, especially as they had made the shortlist for Independent Publisher of the Year. We were thrilled for each other and when they sent me the photo of the bookstack above, it finally hit home. It’s an image I’ll never forget, those iconic names along with my own. I knew then, that win or lose that Nibbie Award, I was already a winner, just to make the line-up. I could have cried, because the road I travelled to get this far was not exactly smooth.

Very few writers have an easy time getting into print, and I know my story is not unusual, but the ups and downs have been emotional ones, with a lot more downs than ups! Strangely, that is true of most of my life, something I will not bore you with, but it’s been no walk in the park! Anyone who can own a successful florist’s business, attracting some amazing venue work, then see it fail because of a financial crash, and finish up working on a till at Heathrow Airport, has weathered some pretty hefty storms!

But I survived! I found jobs in bookshops and rekindled my love of reading and also of writing. I started with short stories, then attended a Writer’s Course with the legendary Sue Townsend, and knew immediately, I wanted to be a writer. Then, fortuitously, I met my partner, Jacqueline. She was a serving police officer, due for retirement after 30 years’ service, and we decided to move away and start the next stage of our life somewhere new. That is how we came to the Lincolnshire Fenlands. Property was reasonable, and the pace of life slower that anything we’d ever known; it was perfect. Neither of us were of official retiring age, but we hoped that if we were careful, somehow we’d manage, and I would finally have time to write.

And I did! We arrived in the misty Fens in 2000, and I began as soon as we’d unpacked! Unfortunately I got off to a false start, all excited having found an agent who loved my first cross/genre book, but was unable to place it. Back to the drawing board. Wrote a sequel, but no luck there. Ditched them both. Started again, this time with police procedural crime, after all with a highly decorated police officer in house, (Queens Commendation for Bravery, no less!) I knew my research would be correct! Then it began... Submit, Wait, Get rejection letter, Write more... deep breath, and repeat. Well, I repeated this for 12 years, until the first DI Nikki Galena book was published in hardback. I was finally a published author! Sadly, after the second book was published, the short print runs ran out, and in no time, I was an out of print author. We were now coming to the end of 2016, and it was time to draw a line under the dream that never materialised. I’d never given up on anything, but I didn’t want to waste any more of our lives.

And there the story should have ended, but how’s this for serendipity? The next day I had a call from Jasper Joffe of Joffe Books, a small independent publisher. He’d read my book, and would I consider joining them?

Joffe Books is now one of the leading Indies, selling over 2.8 million books a year, and Joy Ellis, with 25 books under her belt, has found herself in a bookstack of six books, labelled The British Book Awards!

The Patient Man by Joy Ellis (Joffe Books) Out Now

Serial killer Alistair Ashcroft is back and more terrifying than ever. He sends a sinister warning to DS Marie Evans and breaks into DI Rowan Jackman's uneasy domestic bliss. Now everyone Jackman cares about is in danger. Yet for all Ashcroft's taunts, he is nowhere to be found. Meanwhile, a seemingly routine break-in at the home of gun-club owner Kenneth Harcourt becomes complicated when the man long held responsible for killing Harcourt's young daughter is shot dead in a car park - by a sniper. A killer is on the loose in the quiet streets of Saltern-le-Fen, and he isn't going to stop. And the sniper, like Ashcroft, takes to taunting the police: they'll never catch him, they need to respect him, they shouldn't be sidetracked looking for their old adversary. Jackman and Evans find themselves in a lethal game of cat-and-mouse, but are they the cats or the mice?