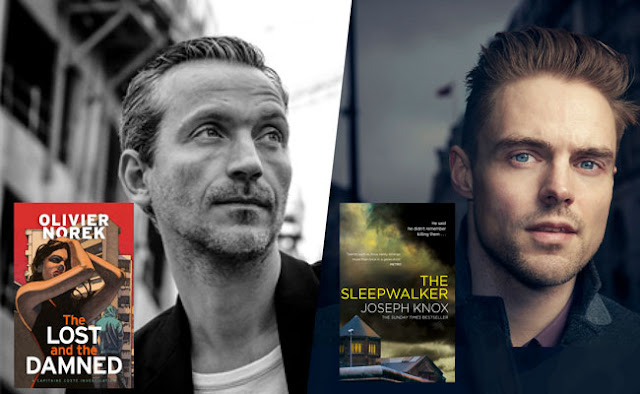 More than just a crime fiction, the noir explores how amoral protagonists deal with a corrupt world where everyone has fallen. The genre that thrived in the war-torn 40s and the tumultuous 70s, has made a comeback in the past years.

Respectively the authors of bestsellers Sirens and The Lost and the Damned, Joseph Knox and Olivier Norek have played a major part in this revival. In a discussion chaired by Ayo Onatade, they tell us what makes the noir genre so riveting and what its resurgence tells about our era. The discussions will be interspersed with readings by actor David Mildo.

New Noir Novels is part of the Beyond Words French Literature Festival and is taking place on Saturday 22 May at 6:00pm. More information can be found here. You can watch it free on the French Institute UK YouTube Channel or on the Institute Francais London Facebook page.

A corpse that wakes up on the mortuary slab. A case of spontaneous human combustion. There is little by the way of violent crime and petty theft that Capitaine Victor Coste has not encountered in his fifteen years on the St Denis patch - but nothing like this. Though each crime has a logical explanation, something unusual is afoot all the same, and Coste is about to be dragged out of his comfort zone. Anonymous letters addressed to him personally have begun to arrive, highlighting the fates of two women, invisible victims whose deaths were never explained. Just two more blurred faces among the ranks of the lost and the damned.

It starts with the girl. How it ends is up to Detective Aidan Waits. Isabelle Rossiter has run away again. When Aidan Waits, a troubled junior detective, is summoned to her father’s penthouse home – he finds a manipulative man, with powerful friends. But retracing Isabelle’s steps through a dark, nocturnal world, Waits finds something else. An intelligent seventeen-year-old girl who’s scared to death of something. As he investigates her story, and the unsolved disappearance of a young woman just like her, he realizes Isabelle was right to run away. Soon Waits is cut loose by his superiors, stalked by an unseen killer and dangerously attracted to the wrong woman. He’s out of his depth and out of time. How can he save the girl, when he can't even save himself?

The Sleepwalker by Joseph Knox (Transworld Publishers Ltd) Out Now

He said he didn't remember killing them... As a series of rolling blackouts plunge the city into darkness, Detective Aidan Waits sits on an abandoned hospital ward, watching a mass murderer slowly die. Transferred from his usual night shift duties and onto protective custody, he has just one job... To extract the location of Martin Wick's final victim before the notorious mass murderer passes away. Wick has spent over a decade in prison, in near-total silence, having confessed to an unspeakable crime that shocked the nation and earned him the nickname of The Sleepwalker. But when a daring premeditated attack leaves one police officer dead and another one fighting for his life, Wick's whispered last words will send Waits on a journey into the heart of darkness... Manipulated by a reticent psychopath from his past, and under investigation from his new partner, Detective Constable Naomi Black, Waits realises too late that a remorseless contract killer is at work. Can Aidan Waits solve his last case before fleeing justice? Or will his name be next on the hit list?