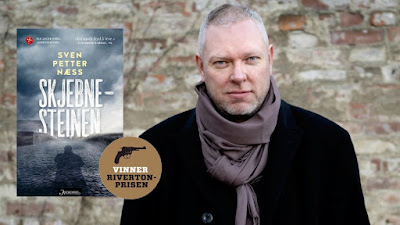 The Riverton Prize for Best Norwegian Crime story was awarded to Sven Petter Næss for his second book “Skjebnesteinen” (Fate of Stone/ Stone of Destiny)was chosen as the best detective novel of the last year and he received the generous Rivertonprisen crime prize in Slottsparken near Litteraturhuset in Oslo on Thursday 29 April 2021.

The Fate of Stone/ Stone of Destiny’ is the second book in the Harinder Singh-series.

According to the jury - ‘The Fate Stone/ Stone of Destiny’ is a crime novel of the best brand: well written, well structure, with intricate crimes and correspondingly difficult police work. They go on to say that the prize goes to a book that satisfies all the requirements of a crime novel with realistic and credible description of police work, while it also creates unrest, fear and excitement in the reader. Nothing is accidental or unclear in ‘The Fate Stone/ Stone of Destiny’'

The Riverton Prize (Norwegian: Rivertonprisen) is a literature award given annually to the best Norwegian crime story (novel, short story, play, original screenplay). The prize is named after the Norwegian journalist and author Sven Elvestad (1884-1934) who published detective stories under the pen name Stein Riverton.