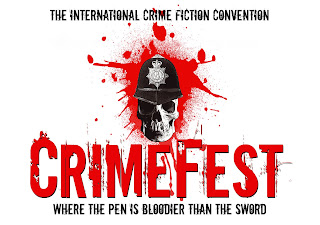 CRIMEFEST, one of Europe’s leading crime writing conventions, has announced the shortlists for its annual awards.

The awards feature the Specsavers Debut Crime Novel Award, the winner of which receives a £1,000 prize.

A further £1,000 prize fund is also awarded to the Audible Sounds of Crime Award, sponsored by Audible.

Up for the hotly-contended Specsavers Debut Crime Novel Award is Richard Osman, who ruled the bestsellers lists with his smash-hit, The Thursday Murder Club.  The shortlist also features Trevor Wood, who won the CWA John Creasey (New Blood) Dagger in 2020, for The Man on the Street.

Sheila Mitchell's biography of her husband - and namesake of the H.R.F. Keating Award – is in contention for the best biographical or critical book in the genre. Mitchell’s HRF Keating: A Life of Crime has been hailed as the definitive portrait of the artist and man.

The H.R.F Keating Award also features Martin Edwards, editor of HowDunit: A Masterclass in Crime Writing by Members of the Detection Club, which has also been nominated for the 2021 Edgar Allen Poe Award. Also in contention is Heather Martin, an academic, linguist and author of the definitive Lee Child biography, The Reacher Guy.

The Last Laugh Award sees debut-author Richard Osman return as he is pitted against stalwarts of the genre, including Elly Griffiths and Carl Hiaasen.

Osman, who dominates the shortlists, is also up for the Audible Sounds of Crime Award. The Pointless TV-star is up against veritable giants of the genre, including Robert Galbraith, Ian Rankin and Lynda La Plante. Voted by Audible subscribers, the shortlist also sees last year’s winner Lee Child return, with his brother Andrew, for The Sentinel, read by Jeff Harding.

Laurence Howell, Vice President, Content at Audible said: “We are delighted to continue as sponsor of the Audible Sounds of Crime Award. With the isolation and social distancing of the last year, audio books have been a great comfort to many because of the intimate, immersive nature of audiobooks. Crime and thriller audiobooks remain one of our bestselling genres, as perhaps more of us seek escapism and entertainment in these trying times. Congratulations to all award nominees.”

The eDunnit Award, for best e-book, sees established names of the genre Ian Rankin, Michael Connelly and James Lee Burke up against the young Australian Gabriel Bergmoser, a multi-award-winning screenwriter, playwright and author who is already a phenomenon in his own country.

Best Crime Novel for Young Adults, aged 12-16, features Enola Holmes: The Case of the Missing Marquess by Nancy Springer, which was released last year to coincide with the Netflix adaptation, starring Millie Bobby Brown. The list also features the multi-award-winning author Patrice Lawrence, who won the CRIMEFEST award in 2018 for Indigo Donut. Lawrence is in contention this year for Eight Pieces of Silva, an addictive tale of a teenager’s hunt for her missing sister.

Now in its 14th year, the awards honour the best crime books released in 2020 in the UK.

Adrian Muller, Co-host of CRIMEFEST, said: “CRIMEFEST usually takes place in May, and although we had to cancel our physical convention this year, it’s important to continue these awards. They’ve built up a strong reputation after so many years, and we are thankful to both Audible and to Specsavers for their on-going support.”

CRIMEFEST has had to postpone its 2020 and 2021 conventions, due to Covid restrictions. Hosted in Bristol, it is one of the biggest crime fiction events in Europe, and one of the most popular dates in the international crime fiction calendar, with circa 60 panel events and 150 authors over four days.

In light of Covid-19, the 2021 winners will be announced online at www.crimefest.com and via its social media pages this summer.

Leading British crime fiction reviewers and reviewers of fiction for children and young adults form the CRIMEFEST judging panels, aside from Audible Sounds in which Audible listeners establish the shortlist and the winning title.

Co-host of CRIMEFEST, Donna Moore, added: “As well as the debut awards, we are one of the few genre awards that recognise e-books and audiobooks, humour, children and Young Adult crime fiction novels. We aim to be the most inclusive of awards to reflect the values of our convention.”

CRIMEFEST was created following the hugely successful one-off visit to Bristol in 2006 of the American Left Coast Crime convention. It was established in 2008. It follows the egalitarian format of most US conventions, making it open to all commercially published authors and readers alike.

The Creak on the Stairs by Eva Bjorg Aegisdottir (Orenda Books)

The Wreckage by Robin Morgan-Bentley(Trapeze)

The Man on the Street by Trevor Wood (Quercus)

The Sentinel by Lee and Andrew Child, read by Jeff Harding (Transworld)

The Catch by TM Logan read by Philip Stevens (Zaffre)

A Song for the Dark Times by Ian Rankin, read by James Macpherson (Orion)

Agatha Christie’s Poirot: The Greatest Detective in the World by Mark Aldridge (HarperCollins)

The Red Hand: Stories, reflections and the last appearance of Jack Irish by Peter Temple (Riverrun)

Bryant & May - Oranges and Lemons by Christopher Fowler (Doubleday)

The Hunted by Gabriel Bergmoser (Faber)

The Split by Sharon Bolton (Trapeze)

A Song for the Dark Times by Ian Rankin (Orion Fiction)

My Headteacher is an Evil Genius by Jack Noel (Walker Books)