Books to Look Forward To From Europa Editions

In the Shadow of the Fire is by Hervé Le Corre. A breathless criminal investigation against the bloody canvas of the French Revolution. The Paris Commune's "bloody week" sees the climax of the savagery of the clashes between the Communards and the French Armed Forces loyal to Versailles. Amid the shrapnel and the chaos, while the entire west side of Paris is a field of ruins, a photographer fascinated by the suffering of young women takes "suggestive" photos to sell to a particular clientele. Young women begin disappearing, and when Caroline, a seamstress who volunteers at a first aid station, is counted among the missing, her fiance Nicolas, a member of the Commune's National Guard, and Communal security officer Antoine, sets off independently in search of her. Their race against the clock to find her takes them through the shell-shocked streets of Paris, and introduces them to a cast of fascinating characters.

The Bastards face their hardest challenge yet. Sometimes it takes facing a formidable adversary to truly know one's worth. The Bastards of Pizzofalcone may have found just that: when the brutal murder of a baker rattles the city, they are ready to investigate. There's nothing they wouldn't do to prove themselves to their community. But this time the police are divided: for the special anti-mob branch, the local mafia is doubtlessly responsible for the crime, but the Bastards are not so sure and think there may be another reason for the murder of the renowned artisan, whose traditionally baked bread attracted customers from far and wide. A rivalry between the policeman and the magistrate is formed, one that, in the end, will extend to more than just their work lives. Bread: The Bastards of Pizzofalcone is by Maurizio Giovanni. 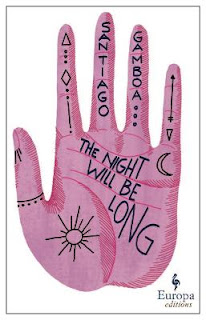 An addictive and nuanced narrative about conflict-rife Colombia. A boy witnesses a violent confrontation in a remote part of town in the state of Cauca, Colombia. Minutes later, someone arrives at the scene to clear up all trace of the incident. No one in town claims to have heard or seen anything, and yet an anonymous accusation launches a dangerous investigation that unfolds within the corrupt world of the Christian churches of Latin America. A story that urgently reveals inequality and violence that govern an entire country. The Night Will Be Long is a devastatingly humorous thriller by Santiago Gambao.