Psychological drama behind The Silent Girl 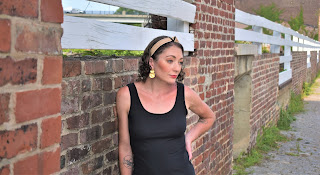 Out this April, The Silent Girl is what I’ve described as a fever-dream of a novel, with elements of crime thriller, romance, mystery, Southern gothic, and more. I love to use lists to describe it, like so: This story has everything—labyrinthine Edwardian architecture; a woman on the run from a dangerous secret she can’t even remember; a haunted stained-glass window; Pentecostal snake handling; a most unapproachable love interest, and so, so many lingering, tense stares.

The premise: Sophie can’t remember her name, where she’s from, or who tried to kill her. All she has is a mysterious necklace and a dreamlike vision, a memory of a field of flowers. Of course, those aren’t much help, considering she’s all but certain that someone is still following her. Sophie is running for her life, a victim of a terrible crime—or is she? She doesn’t remember anything about where she’s from—or does she?

So, it is a fairly straightforward thriller premise. Sophie is haunted—by what, she doesn’t know, but she’s got her choice of scares: mountainous wilderness, a spooky house, the constant sense of being followed. But what I learned as I wrote was that what truly haunts Sophie is what’s inside her mind, a deep feeling of being fundamentally incomplete.

I’ve heard people refer to co-dependency as ‘the disease of lost self.’ I began with an image of two people, one brilliant and charismatic, bound in some way to the second, who is less so, a tag-along in constant awe of the first. Where we hope for any relationship to ultimately be a site of growth, a co-dependent relationship prevents individuation. And Sophie is so deep into such a relationship, so accustomed to feeling incomplete on her own, that she doesn’t even know it. While the incident that leaves her without memory is indeed a function of the co-dependent relationship, it is also what forces her to step out of it. As she says at one point in the story: I remember, now, that I always take the safe choice. That I don’t let anybody in, ever…I’ve remembered this too late.

And as I wrote, reaching into her past and exploring her present conundrum, I discovered Sophie’s individuality, in ways along with the character herself. Against all odds, she is incredibly determined, and has a bone-deep impulse toward doing the right thing. She is fiery and tender and fearlessly optimistic, even in the bleakest places. I have never felt so much like a cheerleader for one of my own protagonists as I do for Sophie.

But a co-dependent does not know how to live for themselves. Because this is fiction, the co-dependent relationship is literally deadly. But to Sophie, that environment is familiar, feels safe. As someone more eloquent than me once said, when you are acting in your own interest, when you are drawing boundaries where you have been taught not to, it won’t just be uncomfortable—it will feel like trying to breathe underwater. And that discomfort is a lot of what is bound up with Sophie’s terrifying cat-and-mouse as she tries to discern who is following her, or if anyone even is.

Nor does a co-dependent know how to build a real relationship, which is one of Sophie’s more significant undertakings. Every codependent has a narcissist. Of course, the word narcissist comes from the old story where it doesn’t matter how much you talk to them, they can only talk to their own reflection. Imagine how jarring, for an Echo-type to have someone look right at her and listen to what she says. Even in Sophie’s buried memories, there’s no training for what to do when you’re talking about your problems to somebody who actually listens. I’ve said too much. There’s something heady, almost intoxicating, about the way he listens to me, the way he wants to hear my thoughts. It puts her on the defensive, throws her off. To someone who wants to help you heal from your wounds, not for their own sake, but for yours. For Sophie, who isn’t used to anything else, the attentions of the man she is inexplicably drawn to, in so many ways cause her suspicion and distress, making her even more determined to hide her past from him, even when it matters most.

But nobody can save the day for her. If Sophie weren’t responsible ultimately for saving herself, then she wouldn’t get to learn anything. It has been an absolute delight to write a story that throws these dysfunctional emotional dynamics into the kind of high-stakes adventure that forces the disordered personalities to get themselves sorted already, or die trying. I hope you love it.

The Silent Girl by Kelly Heard (Published by Bookoutre) Out Now.

Sophie wakes in a cold hospital bed with no memory of her life before. She isn’t even sure if Sophie is her real name… The police tell Sophie she was found alone, unconscious and surrounded by blood-red flower petals, on a remote stretch of highway. She had no I.D., no phone, and no one had reported her missing. But while Sophie’s identity is a mystery, one thing is clear: someone tried to kill her and they almost succeeded. While she’s recovering, Sophie can’t shake the feeling someone is watching her. When a bouquet of red roses is sent to her room without a note, she is convinced they’re from the same people who left her for dead with crimson flowers woven through her hair… With no one to turn to, Sophie takes a job working high in the mountains, miles from the nearest town, where she feels she might finally be safe. Until more red flowers begin appearing on the front step of her secluded cottage. Every cell in Sophie’s body is telling her to run. But she is also desperate to know the truth about who she is. If she lets these people catch up with her, she could finally uncover her past… Or once again place her life in terrible danger…