The Shotsblog are delighted to take part in the cover reveal for The Apollo Murders by Astronault Commander Chris Hadfield.

Watch the trailer for the book below - 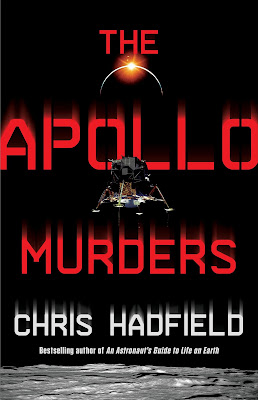 The Apollo Murders by Chris Hadfield (Quercus Publishing) Out October 12 2021.

The far side of the Moon, 1973. Three astronauts are trapped in a tiny Apollo module, and one of them has murder on the mind... From internationally bestselling astronaut Chris Hadfield comes an exceptional Cold War thriller from the dark heart of the Space Race. As Russian and American crews sprint for a secret bounty hidden away on the Moon's surface, old rivalries blossom and the political stakes are stretched to breaking point back on Earth. Houston flight controller Kazimieras 'Kaz' Zemeckis must do all he can to keep the NASA crew together, while staying one step ahead of his Soviet rivals. But not everyone on board Apollo 18 is quite who they appear to be.