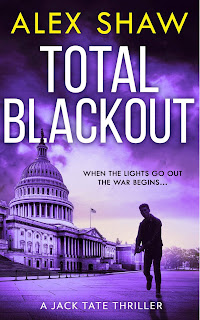 Jack Tate is having a well-earned break in Maine, after a recent mission. The former SAS trooper is now a member of E Squadron, an ‘off the books’ military cadre, employed by MI6 for undercover operations where the Government needs support a regime but doesn’t want visibility.

His sojourn in America’s most north-easterly state is rudely interrupted by the detonation of an EMP (Electro-Magnetic Pulse) device over Washington D.C. With the devastation of the U.S. power grid and anything with a computer chip in it looting and violence in the streets erupts across the country.

In the ensuing chaos, the entities behind the EMP start a systematic campaign to assassinate or kidnap important targets. Is this another country bringing down the U.S.A?

With the conventional military impotent, it falls to Jack to improvise and overcome.

Alex Shaw takes the reader on a breakneck ride that just doesn’t let up for a moment. There’s certainly enough ‘tech’ and weapons for Clancy and McNab fans, but, Jack is by no means just a chisel-jawed, one-dimensional hero. The author gives him a backstory, feelings and a raison d’etre, which added to this readers enjoyment.

Add in a Washington D.C. cop on a mission; a ‘back from the dead’ villain; Jack’s foster parent’s son; EMP-shielded cars; helicopters; private jets and action that never lets up for a moment and you have a white-knuckle ride opener for a new series from Alex Shaw.