Murder at Monk's Barn (and more) by Cecil Waye - Reviewed by L.J. Hurst 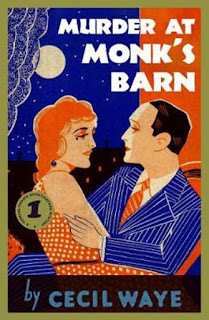 Perhaps you remember the excitement of a few years ago when we learned, via Geoff Bradley’s magazine CADS: Crime and Detective Stories, that more gold had been discovered in the hinterland of crime fiction. We learned that John Rhode, who also wrote as Miles Burton, had for three years and four titles had a third identity. He had been Cecil Waye (his real name was Cecil Street, hence ‘Rhode’ and ‘Waye’, and had lived near a village named Bruton which in an act of metathesis became ‘Burton’). There was only one problem: Cecil Waye’s titles were so rare as to be impossible to find. We despaired. Thanks now to Dean Street Press we need despair no longer: all four books are in print, each using an introduction by Tony Medawar.

Rhode had his series characters (police officers Hanslet and Waghorn and brain Dr Priestley), as did Burton (Inspector Arnold and gentleman detective Desmond Merrion). Cecil Waye varied his approach slightly, his books revolve around Perrins’s detective agency, run by brother and sister Christopher and Vivienne Perrins. DSP label the covers ‘A “Perrins” Private Investigations Mystery’ and number the books 1 to 4, which is useful, for while each book in this series can be read alone the presence of Christopher and Vivienne or their absence, or their abode, is explained as the books progress.

Vivienne is the prominent detective in Murder at Monk’s Barn, as a local industrialist calls in the agency when the local police suspect that he murdered his brother. This book is also the one most like John Rhode’s other detective stories in the complexity of the murder (the first victim is shot through a curtained window apparently from a vantage point in the air; a later victim is poisoned), though neither Rhode nor Burton tended to emphasise marital difficulties and problems of obtaining grounds for divorce as we find here. It is Vivienne, too, who explains ultimately the elaborate machinations required for the placing of the weapon, though coolly or cruelly it is to the murderer that she reveals how the crime was committed, which should give them the chance to take the easy way out. Unfortunately, again, that is not what happens.

Closing events mean that Vivienne is absent from the second book in the series, The Figure of Eight (ISBN13: 9781913527853). Again this begins with a mysterious death (a bus passenger who has been thought to be asleep for too long) but develops into more of a thriller based around rival struggles in London of the diplomats and their agents of two South American countries. This, though, is far above the standard thriller of the inter-war years and progresses through detection. Three dead men in an upstairs office when only one of them was seen to go in and no one was seen emerging is the nexus of the puzzle. Waye introduces here what will become an element in the later books: never trust the driver of a hire car or taxi.

The End of the Chase (ISBN13: 9781913527877, Perrins number three) in distinction to The Figure of Eight, which had foreign battles in London, moves across Europe as Christopher Perrin first helps nab a crook in Belgium, then must travel to Vienna and Budapest. Tony Medawar’s Introduction provides some help here: Cecil Street had been in military intelligence and then in the 1920s had written about the politics of a number of European countries. His familiarity with these places – he adds little just for the sake of local colour – helps to make the gathering of international crooks and their stooges from them more believable. The most interesting point about this is that the crooks—in a smaller scale version of Goldfinger’s plan to rob the international gold reserves – intend to make use of a German Weimar (this was published in 1932, remember) scheme to merge with Austria (years before the Nazi Anschluss) and so to play havoc with the international banking system, which in turn would lead to war. A character with multiple identities and a love interest too close to the villains all help to confuse the issue. Is there a problematic car drive? At least Christopher Perrins gets a bash on the noggin when he has his car bonnet lid up.

The Prime Minister’s Pencil (ISBN13: 9781913257891) was the last of Cecil Waye’s books, and takes us back to the John Rhode style. This is the Golden Age: the daughter of a wealthy man comes to the Perrins Agency wanting them to look for her father’s secretary. The man has disappeared and the father is not particularly worried. In other books of the period this secretary would be a young man of good background but limited means with whom the young lady was in love. Not here. Here the lady wants the secretary found because her father will not pay her bills and the secretary is the only man who can get money out of him on her behalf. It might be nice if the secretary were to return to the family mansion. In fact he does. But he is dead and his body is found in a pavilion in the grounds. It takes some time before it is discovered that he died of an acute tropical disease.

Becoming curious about the father, Sir Ethelred (a parvenu businessman who is trying to become a major figure in his political party), Christopher starts to track the secretary’s movements in his last days only to find that one of his informants is soon pulled from the Thames, dead. Then the worst happens – except that it is not the worse because Christopher goes along with the police investigation – the Prime Minister is killed in a blast that knocks out his assistant. Everything revolves around the pencils that the Prime Minister and his circle prefer to use – soon we are in a world of ‘H’s and ‘B’s, of round and hexagonal barrels, and where those pencils were obtained and where sharpened and with what.

Dodgy cars and drivers appear, as well as faked escaped attempts, but the master plan is likely to end in tears because the villains use their own properties – even if they are country properties – for their villainous ends and nidos commaculans inmundus habebitur ales (it’s an ill bird that fouls its own nest) as the old saw has it. The secret of the exploding pencil is explained, too, though that requires a suspension of disbelief to accept it, yet the motive for the murder has almost exactly re-occurred in 2021 (financial benefit in government legislation), even while the politics (which supposes two party politics) is another invention (the ‘National’ government of Stanley Baldwin in the 1930s had a tiny opposition, hence power similar or greater to today’s majority party). That the girl who started it is left in the hands of the money-lenders who will strip her of everything seems to be taken for granted. Christopher Perrins ends the series as cynical as any hardboiled detective in Chicago or LA.

Why Cecil Street abandoned the Perrins and their adventures is difficult to say: he managed to use two bright young things in murders as clever as anything he devised elsewhere. Equally, given that the discovery of Cecil Waye provoked such interest it is surprising the re-issue of the four books by Dean Street Press has not provoked more notice. Here they are. Take them all. They are good.
Posted by Mike Stotter at 12:31