Rebecca had watched the silhouette of the city disappear in the side-view mirror until it was swallowed up by the night sky. Only then did she let herself take a full breath.

It was easier now that they were out of Lubbock. It was the first step, and the biggest.

When the Jeep had pulled up outside the house, she’d sat in the dark of their bedroom, hands folded neatly in her lap, and listened to the faint rumble of the Jeep’s engine. This was what she had wanted— what she had carefully planned— but now that it was here, she was paralyzed. Five minutes passed, then ten. They had told her the driver would wait for twenty minutes— no longer. At the fifteen- minute mark, she grabbed her bag and ran to the door. If she hesitated for even a second, she knew she’d never make it. When she stepped out into the freezing night, there was no bolt of lightning waiting to strike. No corrective zap from an electric fence. Just a girl in a Jeep, waiting for her.

Rebecca couldn’t believe how quiet the neighborhood was at that time of night. The low thrum of the engine and the distant cry of a skulk of foxes. She could hear her heart pounding in her chest as she checked the lock on the door, and the soft pad of her footsteps as she walked across the pavement. It was easy, in the end.

Still, the same worries snagged in her head. What if he comes home early? What if someone found out my plans and told him? They promised total confidentiality over the phone, but I know how people operate. No one can be trusted, especially not if there might be money involved. And with this, there would be.

Rebecca looked over at the girl. She was young: somewhere in her mid- twenties. Just a baby, really. She had expected someone older. It felt strange being driven by someone so much younger, a reversal of the natural order.

Nearly three years in Texas and the place still felt as strange and alien as it had the first time she’d set foot in it.

She still felt like a stranger in the place she was meant to call home.

Bookends and Biscuits is hosting Chapter 4 which is the next stop on the tour. 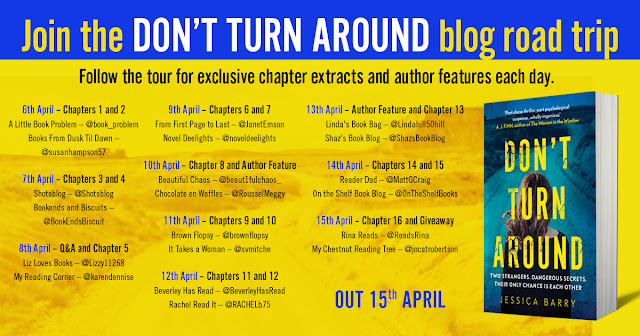