Cataloging 007 from A17924 to Zwart: The Origins of The James Bond Lexicon By Alan J. Porter & Gillian J. Porter 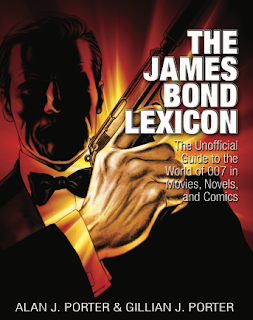 “Oh, I’m sure we can get the research done in a year…” So much for that way over optimistic estimate of what it would take to us chronicle the various lives and worlds of the world’s most famous secret agent across almost seventy years of adventures in various movies, novels, and comics.

While there was already separate encyclopedias covering the Bond movies and the Ian Fleming stories we felt that the Bond community needed an overarching reference that would bring all the worlds of 007 together including unfamiliar spin-off material and stories told in other media. It was a reference book that we wanted on our shelves, so we set out to write it.

It turned out to be a bigger project than we first estimated, and we faced some obstacles along the way.

We originally planned to publish the book sometime in 2016, but in mid-2015 Gillian was diagnosed with Stage 3 Gall Bladder Cancer, which hit us pretty hard. As a consequence, we decided to put everything on hold to fully focus on Gill's surgery and treatment.

By mid-2017 things were going well enough that we decided to get back to working on the book and updating the manuscript. Unfortunately, it was around this time that one of the co-owners of the publishing company we had contracted with suddenly passed away. His business partner decided he didn't want to continue and shut the company, so we were now left with a partially updated manuscript and no publisher. This was a big decision point for us, and to be honest we came very close to just shelving the project. But after some thought decided to carry on and include all Bond material through to the end of 2017 and see if we could find another publisher.

A series of conversations with our On Her Majesty's Secret Podcast co-host Van Allen Plexico in 2018 resulted in him agreeing to publish the James Bond Lexicon via his White Rocket Books imprint and we were back to updating the manuscript for the third time with the intent to cover everything up to the end of 2019 so we could include Danny Boyle's Bond 25 (or so we thought).

Once the No Time To Die delays started to happen we had to make a decision of whether we stuck with "everything up to the end of 2019" or keep waiting so we could include the most recent movie. At first, we thought about waiting but as the impact of COVID started to result in multiple slip dates we decided to stay with what we had and actually work towards getting the book out. So we fixed it at covering the 271 official Bond stories released between 1953 and the end of 2019 - you have to put a line in the sand somewhere on a project like this or you will never finish.

We also decided to launch a companion website (http://jamesbondlexicon.online) where we are posting new entries for material released after 2019, and hopefully, one day that will include the entries for No Time To Die.

So here we are in April 2021 and are delighted to see The James Bond Lexicon book finally available, and hope that it will become a well loved and much thumbed reference for Bond enthusiasts, scholars, and general pop-culture fans.

The James Bond Lexicon includes more than 450 pages (over 300,000 words!) of Bond knowledge. Between its oversize covers you will find 5,000 individual entries, covering all the characters, major and minor; all the great Bond gadgets, famous and obscure; those famous vehicles; and the exotic locations Bond and his adversaries have visited, among many other items. The detailed entries come from more than two hundred different Bond stories, as presented in all the various media, from film to comics to tv to novels.

Additionally, the book is fully illustrated with more than eighty pieces of gorgeous original artwork by noted artist Pat Carbajal. 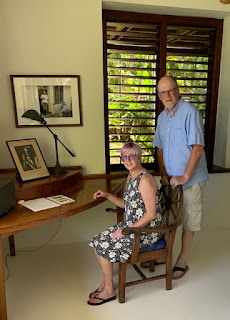 The James Bond Lexicon: - The Unofficial Guide to the World of 007 in Movies, Novels, and Comics by Alan J Porter and Gillian J Porter (Published by White Rocket Books) Out Now!

300,000 Words, 5,000 Individual entries, 200+ stories covered, 80+ pieces of original art and 6 Years of Research. It all adds up to ONE book –The James Bond Lexicon - the most comprehensive guide to the worlds of James Bond in Movies, Novels, TV, and Comics.  Covering 271 James Bond stories released between 1953 and 2019. Written by Alan J. Porter and Gillian J. Porter: This husband and wife team are active in the James Bond community and are both members of the Ian Fleming Foundation. Alan J. Porter is the author of JAMES BOND: the illustrated 007 (Hermes Press), the critically acclaimed history of Bond in comics, and has presented shows on the topic at museums, libraries, and various comics and science-fiction conventions. Alan is also a regular show co-host on the On Her Majesty’s Secret Podcast channel.

Photograph of Gill and Alan Porter at Ian Fleming's desk at Goldeneye, Jamaica.