I’m often asked what inspires me to write crime and psychological thriller. The short answer is people. I’m fascinated by what shapes people. A writer’s mind thrives on exploration. Every scenario, every place, every face tells a story.

When I’m not writing I can usually be found messing about on the water with my partner in our little narrowboat, Aquaduck, which I can also often be found falling off. I kid you not. Coming into moor one evening, I fell off the stern end. My partner didn’t notice I’d gone. Needless to say, when I surfaced my words were choice. Yes, we’re still together. In fact, I married him. Now there’s the nucleus for a psych thriller plot if ever I saw one.

It’s perhaps hard to imagine how the tranquil British waterways might entice my mind to conjure up murder or psychological torture. Bear with me. So, boating actually being quite a strenuous activity – there are many heavy locks that have to be worked to get the boat from A to B – we tend to moor up as near as we can to a pub for our evening meals. Sometimes the spots we moor in can be very remote and the pub can be a long way off, involving a trek along the towpath with nothing but the wind whispering through the trees and the eerie calls of nightlife for company. 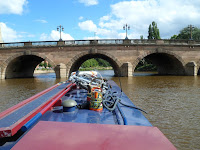 Hold in mind here my last reads at the time were The Ladykiller by Martina Cole, who definitely fuelled my desire to delve into the darker side of human nature. I love how Cole gets inside the head of her characters. It’s with morbid fascination you glimpse into the mind of a sexually depraved killer. Also, It by the fabulous Stephen King, which spooked me so much I could see clowns smiling evilly at me through sluice gates. Thus was my mindset on one eerie moon-free evening when we set off along the people-less towpath to the local hostelry. Wined and dined and a weave to our walk, we made the return journey, no light to guide is, other than a dodgy flashlight – river banks and canal banks are sadly lacking in streetlights – and no sound other than the low swoop of a heron and the snap of twigs underfoot.

Nearing the boat, I was surprised to spot someone parked in the sparsely populated country lane running parallel to the canal. A chill of apprehension ran through me. Why, I wondered suspiciously, would a lone driver just be sitting there in the dead of night? My mind then immediately going into writer mode, I was soon playing the ‘what if’ game. What if… he’s a burglar? A psychopathic mad-axe murderer? An arsonist? A ladykiller!

Imagine my trepidation therefore when, on reaching the boat, my partner announced he’d left something in the pub and promptly about-faced back down the towpath to retrieve it, leaving me with the strange night-watcher and my vivid imagination. On my own on the boat – with those branches snapping and a lone owl hooting outside, it wasn’t long before the man had morphed into … a hitman! Obviously, my partner was after the life insurance and I would soon be found floating bloated in the canal (please remember my tendency to fall in. It was a full proof plan!).

Panicking now, I searched frantically for something with which to defend myself. The rubber ring, I decided, possibly wasn’t an effective weapon with which to fend off a hitman. The front hatch of the boat was padlocked, I had no phone signal, and the only other way out was the door he would surely imminently enter by.

Hour long minutes ticked by as I waited, my heart thrashing feverishly. Then, finally, the doors stern-end creaked open and a figure silhouetted against the night-sky appeared – and promptly fell about laughing.

My ‘hitman’, my partner informed me, had apparently broken down and was waiting for the rescue service. Personally, I wasn’t amused. The poor man could have been rubber-ringed to death.

So, that’s where my inspiration comes from. Reading sparks my imagination. People create the story. In My Husband's Girlfriend, I started with a simple premise: You’re meeting the woman who might become your little boy’s stepmother for the first time. On the surface, she’s perfect, but your every instinct screams at you that something is very wrong.

Right, time for another boat trip, I think. Minus the hitman.

My Husband's Girlfriend by Sheryl Browne (Published by Bookouture) Out Now

Tucking her little boy Ollie into bed one night, Sarah notices his beloved teddy bear, which she bought him when he was born, is missing and in its place is a new toy given to him by her ex-husband’s new girlfriend, Laura. When she asks Ollie about it, he begins to shift uncomfortably, before whispering ‘Laura told me a big secret and she said I can never tell you’. Sarah’s heart sinks. But when she raises her concerns, nobody wants to listen. To everyone else, Laura is the perfect stepmother and Sarah is just the jealous ex-wife. But Sarah knew the moment she met Laura she couldn’t trust her, from her overly perfect stepmother act to the way she evaded questions about her own history. Soon Ollie is asking to spend more time with his dad and Laura, and shrinking away from Sarah. Then, when she calls to him in the garden one day, Ollie doesn’t answer back. The garden is silent. Ollie’s sandpit is empty. Ollie has disappeared.