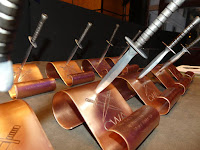 The CWA have announced the longlist for this years Debut Dagger. The Debut Dagger is a competition for the opening of a crime novel by an uncontracted writer. Entries from shortlisted writers are sent to UK literary agents and publishers. Every year, authors find representation this way. This year the Debut Dagger is being sponsored by ProWritingAid.

The long-listed stories are as follows -

The Tonganoxie Split by Zack Daniel

Under Water by Fiona McPhillips

The Lying Days by Julie Nugent

The Tunnel Runners by Elizabeth Todman