Blog Blast for The Untameable by Guillermo Arriaga - Out now!

As part of the Quercus blog blast for The Untameable by Guillermo Arriaga read the review below.

The Untameable is set in the late 1960s, and is an epic saga about revenge and retribution by a teenage boy seeking vengeance for the murder of his brother. The revenge story is interwoven with the story of that of an Inuit hunter and its prey. The narrative journey traverses Mexico and Canada, where the reader is introduced to Juan - the young protagonist in a series of short but incredibly descriptive paragraphs.

Juan and his older brother Carlos have hardworking parents who attempt to raise them out of poverty by sending them to private school; but to no avail as both boys are soon mixed up in a network of misfortune, cruelty and dishonesty. Despite this, both are successful rather to the chagrin of a Catholic hit squad that is working in tandem with corrupt police. With the death of his brother Carlos - to whom he is devoted and that of his parents and grandmother, Juan is having to deal with his own bereavement and brimming anger alongside the fact that he now has to defend himself.

To read the rest of the review please go here. 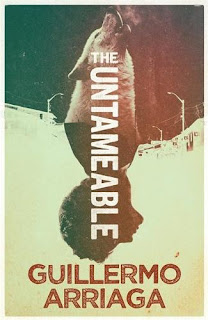 The Untameable by Guillermo Arriaga (Published by Quercus Publishing) Out Now.

Yukon, Canada's far north. A young man tracks a wolf through the wilderness. The one his grandfather warned him about: "Of all the wolves you will see in your life, one alone will be your master." In Mexico City, Juan Guillermo has pledged vengeance. For his murdered brother, Carlos. For his parents, sentenced to death by their grief. But in 1960s Mexico justice is sold to the highest bidder, and the Catholic fanatics who killed Carlos are allied to Zunita, a corrupt and influential police commander. If he is to quench his thirst for revenge Juan Guillermo will have to answer his inner call of the wild and discover what links his destiny to a hunter on the other side of America.