Before the Ruins by Victoria Gosling - reviewed by Gwen Moffat 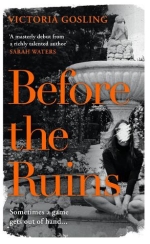 This story is skewed from the start. It’s a confusion of the prosaic and the odd, at times even suggesting a fantasy as told by Andy: a woman who hears images. Intelligent and inquisitive, she is burdened with a distressing legacy of abuse, and the current task of caring for her violent and alcoholic mother.
But Andy is a survivor and she has close friends. Four of them break into an unoccupied manor to smoke and drink and play childish games. Hackles rise when one realises that these children are eighteen and over: tinder waiting for a spark.
It arrives in the person of David, supposedly a friend of the manor’s owners: a school drop-out and petty criminal; clever and seductive, he is the catalyst that one way or another forces the four friends to grow up.
David has a story of fabulous diamonds stolen in the manor’s heyday, the thief tracked down but dying of a heart attack before revealing where he had cached his haul. The gems were never found and must be hidden somewhere in the grounds. David proposes they buy an imitation necklace and play a game of hiding and finding it, the motivation being that during an otherwise pointless exercise the real diamonds will be discovered. One is asked to suspend disbelief that intelligent young men and women should agree to an infantile game of Hunt the Thimble in pursuit of treasure that may be no more than the idle invention of a rogue.
Much of the first half of this story is repetitive and nebulous; you don’t know where you are in time and space and you don’t much care. Things start to jell and turn nasty as shadows are identified and innuendos fleshed out. The grim secret in Andy’s childhood is exposed but neatly balanced by the kindness of Uncle Darren – qualified by the suspicion that even cosy Uncle Darren may have a hidden agenda.
This is a novel imbued with sex but it’s cerebral rather than graphic: nothing to scare the horses. The friends mature: Em has a secret affair with Marcus but Marcus endures a loveless marriage with Andy who has a sudden flare of lust for David while all the time she has adored Peter who is gay and himself obsessed with David.
Such convoluted relationships form the bulk of the book, eventually enlivened with one mysterious death and a murder that is precise and curiously ingenuous. Yet none of this seems to relate to the stated theme of the novel which opens with the disappearance of Peter and his return without fanfare before the end.
Here we have five people: initially bonded, then separating, to coalesce eventually: their several journeys recorded by one of their number in a highly subjective narrative that’s further distorted by her imagination. Symbolism is all so it’s a nice touch that resolution should be achieved in a secret cavern where prehistoric man recorded his own prowess in hunting magnificent aurochs across the limestone walls.

VICTORIA GOSLING is the founder of The Reader Berlin and The Berlin Writing Prize. Her debut novel is BEFORE THE RUINS. Alongside directing The Reader’s day-to-day activities, Victoria works as a freelance editor, writer and consultant and is a former contributing editor of Berlin Stories for NPR. Offering manuscript assessments, mentoring, expert feedback and guidance, she has worked with hundreds of writers and consulted on a wide range of publications currently available in print and online.

Gwen Moffat is a British mountaineer and writer, whose novels are set in remote communities ranging from the Hebrides to the American West.