A Character in Search of a Story 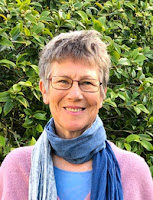 Driving home late on a blustery and rainy night, my route took me past the magnificent lighthouse at St Matthew's Point. Lighthouses are mysterious and wonderful constructions, prone to inspiring writers, which was maybe in the back of mind when I decided to stop and take a closer look. I'd just come to the depressing realisation that the first book I'd written was not going to be the one that catapulted me to the top of the Sunday Times Bestseller List. I was going to have to write another. Anyway the lighthouse did its magic for me that night, when the opening scene of On The Edge - a woman hanging, unconscious and dreaming from the viewing platform of a lighthouse with no idea how she got there - came to me. That opening scene has never changed although its writing has improved over the years it took me to finish the book. 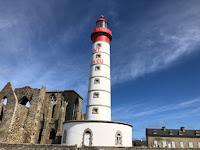 My protagonist, Jenifry (Jen) Shaw must have been waiting for me at the lighthouse too, because she slipped into the car and started talking as I drove away. By the time I reached home I knew almost everything about her. And most important of all, I knew exactly how she spoke and if you know how a character speaks, you know how they think. Characters sometimes arrive more or less full formed to me - the ones that don't, I've learned how to work with to tease out - but none of them have sprung so full-bloodedly to life as Jen did that night.

Anyway I had an opening scene and a character desperate to talk to me. What more did I need? I started writing the next day letting my imagination take me where it will and it took me to a lot of strange places. A few months later the first draft was on paper. A bit of tidying, no, a LOT of tidying and On The Edge Version ONE was ready for beta reading. I was still not that far along my 'learning to write' journey, so I honestly thought there'd be a bit of prose finessing to do and maybe a couple of scenes that didn't quite hit the mark. And I was ready to tackle them, to perfect my book before sending it out to the agents and publishers who I was sure would be eager to claim it for their own.

The truth when it came was difficult to swallow. While readers loved Jen, the plot left them cold. It was wild, they said. 'All over the place' is another phrase I remember. I took a deep breath - I am nothing if not tenacious - and rewrote. I eliminated the worst of the excesses: the woman who lived in a tree in Hyde Park; the stolen and hidden baby; and many other plot delights. Then I reread but even I could see what was left was no good, a weak tale, full of unlikely coincidences and plot holes.

I despaired. I considered abandoning it. Everybody loved Jen. Everybody found the opening intriguing. There were some great sequences. And some of the characters were promising. But without the glue of a story to hold the whole thing together it was a waste of time. What I had wasn't a book but a character in search of a story. 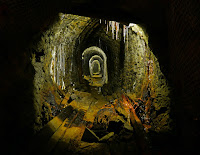 It was time to learn the hard work of writing and I tried. I gobbled up every book I could find on structure. I became familiar with the three-act structure and the five-act, the hero's journey and meaning of midpoint and inciting event. I learned how to turn a scene and build tension. It was all fantastic stuff but none of it gave me Jen's story.

A wise woman told me to stop worrying about plot and to trust my instincts again. I had an array of characters as well as Jen. Why didn't I work on them and see where that led me. I did as she suggested and plunged myself into background work on one the minor characters who was eluding me. This involved researching the history of tin mining in Cornwall - no hardship because it's an absolutely fascinating subject. While I was researching, I came across Rosevale Mine. It's a small mine, abandoned since before the first world war but in recent years a small band of volunteers has been restoring it using traditional methods - a long, hard tedious job.

Something about the notion of a small group of people undertaking such a project lodged itself in my head - indeed I have since though that I could write a whole novel about it - and wouldn't let go. Eventually it showed me a whole different side to the character I was working on and from this came the germ of an idea for a different story. A simpler one, that somehow tied the characters, the setting and the action sequences together in a way my previous plot hadn't.

This story lay underground in all senses of the word. In things hidden beneath the surface and in the dark. In private passions and secret motives. I itched to start writing but I stopped myself. Instead I mined its possibilities. I tracked and planned. I examined each idea and made sure it wasn't leading me down a dead end that I'd struggle to escape from. And then I wrote it.

I'd love to tell you it was snapped up by a publisher straightaway but the truth is it still needed refining, developing and tightening, although the seam of story pinning it together has stayed the same.

On The Edge taught me a lot about everything to do with writing and a lot about myself as a writer. How it's a mixture of sweat and inspiration, of unconscious connections sparking naturally but needing to be developed critically. And about how I struggled with the latter.

On the Edge by Jane Jesmond. (Verve Books) Out Now.

Jen Shaw has climbed all her life: daring ascents of sheer rock faces, crumbling buildings, cranes - the riskier the better. Both her work and personal life revolved around climbing, and the adrenaline high it gave her. Until she went too far and hurt the people she cares about. So she's given it all up now. Honestly, she has. And she's checked herself into a rehab centre to prove it. Yet, when Jen awakens to find herself drugged and dangling off the local lighthouse during a wild storm less than twenty-four hours after a 'family emergency' takes her home to Cornwall, she needs all her skill to battle her way to safety. Has Jen fallen back into her old risky ways, or is there a more sinister explanation hidden in her hometown? Only when she has navigated her fragmented memories and faced her troubled past will she be able to piece together what happened - and trust herself to fix it.