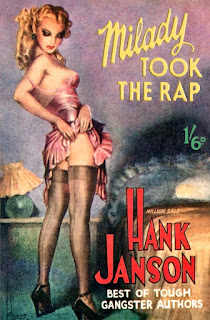 By popular demand, Telos Publishing is reprinting two more of the classic pulp 'hardboiled' Hank Janson detective novels from the 50s. Written by and starring the Chicago Chronicle reporter Hank Janson, the books sold in their millions back in the day, and were also subject to various 'obscenity' trials and court cases for their content and 'salacious' covers.

The two new titles, Milady Took the Rap and The Jane with Green Eyes hail from 1951 and 1950 respectively, and the latter title particularly is noteworthy for it's stand on racism, with several of the characters being particularly nasty examples of the type, and a racially-motivated trial taking place. 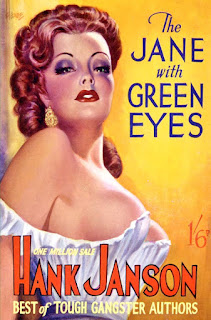 Both titles are being reprinted intact, with a warning that the content may offend modern readers, and they also have their original cover art from acclaimed artist Reginald Heade on the front. In the case of Milady Took The Rap, this is reissued complete for the first time with the sensational cover artwork that was intended for its original September 1951 edition but was dropped prior to publication in an act of self-censorship.

'Hank Janson' was in fact a pseudonym for British author Stephen Frances, who enjoyed much success with his novels in post-war Britain. 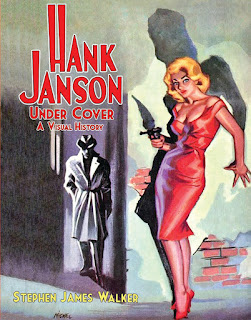 The two titles join the others already reprinted by Telos, and also herald the publication in December of Hank Janson Under Cover, a sumptuous large format, full colour, guide to every cover that the Hank Janson books have enjoyed world-wide, including many rarities and hard-to-find editions. Author and Janson collector Stephen James Walker has scoured private collections and libraries world-wide in his search for the titles, and this book is an unparalleled work, guaranteed to appeal to pulp paperback collectors world wide.