Capital Crime has announced London-based journalist and writer Darren Boyle as winner of the 2021 Amazon Publishing New Voices Award for his thriller The Black Pool.

He will receive a £1000 cash prize, a trophy, and a potential offer of publication from Thomas & Mercer, the mystery and thriller imprint of prize sponsor Amazon Publishing, whose authors include Mark Edwards, Claire McGowan, Dreda Say Mitchell and Damien Boyd. The announcement was made by judges Victoria Haslam and Tariq Ashkanani during a digital event hosted by Capital Crime Festival Director Lizzie Curle and broadcast today. It is available to re-watch here. 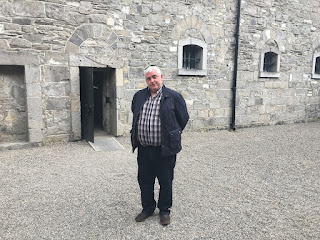 Boyle has more than 20 years’ experience working in the national media in Dublin and London. The Black Pool is set in contemporary protagonist who ventures deep into the murky world of gang- is he willing to risk for the ultimate story?

Boyle has more than 20 years’ experience working in the national media in Dublin and London. The Black Pool is set in contemporary Dublin and features a journalist protagonist who ventures deep into the murky world of organised tiger raids gang- How much is he willing to risk for the ultimate story?

Victoria Haslam, Amazon Publishing editor and New Voices Award judge, said: ‘It’s been a complete pleasure to read our finalists for the Amazon Publishing New Voices Award – the exceptionally high standard of entries has made this an incredibly difficult decision. However, Darren’s storytelling, setting, and authentic voice really shone, and he is an exciting new voice in the crime fiction world. I am delighted that we are crowning Darren our winner for 2021!’

Tariq Ashkanani, Thomas & Mercer author and New Voices Award judge, said: ‘It was absolutely fantastic to be a part of the Capital Crime New Voices panel this year. Finding new writers that can bring their unique voice to the crime genre is so important, and is a wonderful way to shine a light on the diverse talent that’s out there. Darren Boyle’s novel The Black Pool was an instantly gripping story, told with a fabulous, quirky voice and brilliantly sharp dialogue. But the quality of all the entries was incredibly high- trying to choose a favourite was very difficult!’

The Amazon New Voices Award is open to unpublished mystery, thriller, and crime fiction manuscripts in English from writers around the world.

In acknowledgement of the quality of this year’s entries, the judges gave two honourable mentions to the shortlisted writers Patti Buff, a native of southern Minnesota who has lived in Germany for the last twenty years (for The Ice Beneath Me), and Casey King, an Irish crime writer from County Cork (for No Time to Cry).

Generously sponsored by Amazon Publishing for the first time this year, the New Voices Award is a flagship event of Capital Crime, the UK’s leading year-round celebration for crime and thriller fiction. Capital Crime’s live festival will return to a new and tented venue in a central London park from Thursday 29th September to Saturday 1st October 2022. The celebrated crime and thriller festival will feature a wide-ranging line-up of events focused on accessible, mainstream fiction loved by readers around the world. Limited early-bird tickets are now available to purchase here.

Lizzie Curle, Capital Crime Festival Director, said: “We’re very proud to be able to champion the next generation of voices in the crime fiction world with the help of Amazon Publishing and readers. Readers and crime fiction fans are at the heart of everything we do, and the Amazon Publishing New Voices Awards uses an innovative program which allows for them to vote for the book they’d like to read. Darren Boyle is their winner and we know he, and the other shortlisted writers have an exciting road ahead of them. A heartfelt thanks to all who have entered and voted in this year’s awards.”

The response to this year’s award was overwhelming: hundreds of entries from around the world, with writers from countries including France, India, Canada and the Netherlands.