When I was first tempted to continue the adventures of Margery Allingham’s famous detective Albert Campion, almost ten years ago now, I had at least the starting point of a couple of introductory chapters written by her first ‘continuation author’, her husband, Pip Youngman Carter, who died in 1969, three years after Margery.

Asked to continue the series, placing an ageing, quintessentially ‘Golden Age’ sleuth in the Swinging Sixties (or thereabouts), I started Mr Campion’s Fox from scratch, saying that I hoped ‘to fly solo with, and do justice to, a great fictional character.’

With the publication of my ninth ‘Campion’ this month, which contains several flying scenes, it struck me that I have never really flown ‘solo’ with these stories.

For a start, thanks to Margery Allingham, I had wonderful, ready-made, resident cast of characters, notably Campion himself; Amanda, his wife of thirty years (in my timeframe); that solid and dependable policeman Charles Luke; the retired spymaster L.C. Corkran; and, of course, Magersfontein Lugg, that most magnificent of indestructible sidekicks. There was also Rupert, Campion’s son, who was coming of age and available to do some of the heavy lifting - or the ‘running, jumping and shooting’ (as Margery put it) which may be now beyond an elderly gentleman detective. And in one of his continuations, Youngman Carter had given Rupert a girlfriend, Perdita Browning, whom I made his wife, which opened the possibility of a ‘next generation’ of Campions.

Given such a repertory company, I could hardly be said to be flying solo when it came to creating characters. All I had to do was come up with a few plots, research the period I was writing about and stay on track with those much-loved characters, and none of that was done ‘solo’.

To keep faith with Margery’s characters, I had fabulous sources I could call on, the most important being Margery’s own Campion novels and short stories, and to avoid mistakes or fill in any gaps, I had the members of the Margery Allingham Society, who were far more versed in the Campion canon than I was. In addition, I had access to the Allingham archives now lodged in the Albert Sloman Library at Essex University, which gave me a fund of ideas and plot points, including, cheekily, allocating Margery’s passport number to an East German spy! 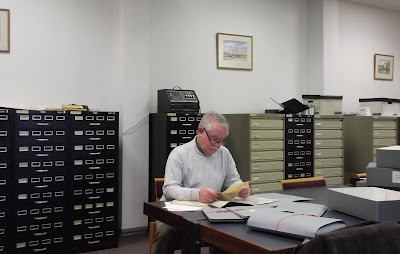 At work in the Allingham archive at Essex University 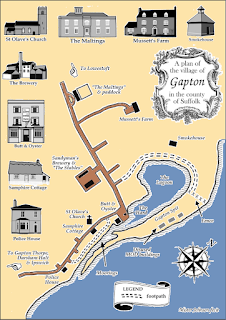 In an attempt to recreate the flavour of the original books, I decided to have, as often as possible, maps of the locations - mostly found (roughly) in Margery’s beloved East Anglia - mentioned in the story. There I was supremely fortunate in tapping in to the skills of Roger Johnson, an Allingham Society stalwart and a noted Sherlockian scholar, who has done fantastic work illustrating the topography in eight of the nine novels so far. Between us we have tried to capture the geography of Margery’s fictional world, though we might have invented extra parts of Suffolk..

And when it comes to basic plot ideas, especially on Mr Campions Wings, I had, literally, a flying lesson from my long time ‘technical advisor’ (i.e. on anything which remotely involves anything mechanical), research scientist and inventor, Tim Coles. Actually, more than just a flying lesson.

Tim and I go back a long way, having met in Cambridge in 1971 whilst both of us worked vacation jobs in Joshua Taylor, the city’s poshest department store. (I think Tim was in ‘Electricals’ and I was in ‘Pots, Pans and Glassware’). His family home was on Barton Road - and the house features in the book - and he had a private pilot’s licence, hence the flying lessons. He had even, in a previous life when I was writing my ‘Angel’ series, taught me how to con my way into a local flying club and hotwire a light aircraft; purely for literary purposes, of course.

On one of our regular hook-ups, Tim said he had come up with a method of murder in an engineering workshop, though he was not sure how to get away with it. He was also keen on a Cambridge setting and, being a city of bicycles, had also thought up a bizarre form of velocipede (it’s in the book) which would have certainly appealed to Margery Allingham’s sense of the ridiculous. Given that Margery had decided, back in the 1930s, to give Amanda Campion (née Fitton) a career in aeronautical engineering and that Cambridge had been a kindergarten for spies, I was sure I could cook up something from these ingredients and the year 1965, for various reasons, virtually chose itself and fitted my Campion timeline perfectly.

But I still wasn’t quite ready to fly solo. There was one particular aspect of aircraft design and development in the 1960s I needed help understanding - an aspect which would be of interest to spies and worth murdering for.

Naturally I turned to another old pal, one who knew about both aircraft and spying, Len Deighton.

Now this wasn’t the first time I had picked the encyclopaedic brain of Mr Deighton. Some years ago, over lunch, our conversation had somehow ranged from the economic history of Florence under the Medicis to a currency scam in Vichy France during World War II and the basic plot of Mr Campion’s War began to take shape. 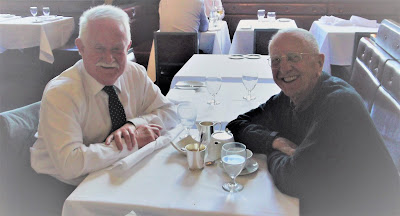 Ripley and Deighton plotting over lunch.

When I explained to Len what I was after, and the help I needed on (very) technical aspects of jet engines and aircraft design, he politely demurred, saying he was not up to speed on such things - however, he knew a man who was, his son Antoni, an aeronautical engineer in America. Antoni turned out to be an enthusiastic and incredibly patient teacher, answering my idiotic questions about hi-bypass engines and teaching me more about air-flow and wing design than I ever thought possible. 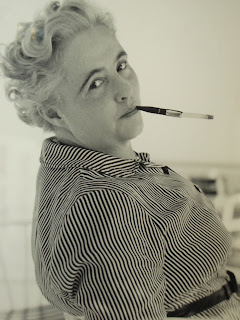 I have made sure that Tim Coles and Antoni Deighton received advance copies of Mr Campion’s Wings (Severn House, 28th October), to give them plenty of time to discover all the mistakes I made despite their expert advice.

All of which goes to prove that when writing a novel, no-one ever flies solo and in my case, especially not with Margery Allingham looking over my shoulder. 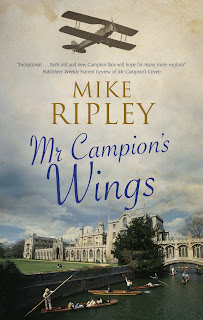 A gruesome discovery at an aircraft hanger leads Albert Campion into a turbulent mystery set in Cambridge in the middle of the Cold War. "I have often said that my wife is a constant surprise to me." Cambridge, 1965. The honorary doctorate ceremony for Albert Campion's wife takes a dramatic turn when Lady Amanda is arrested by Special Branch for breaking the Official Secrets Act. Never before having taken much interest in his wife's work in cutting-edge aircraft design, Mr Campion sets out to discover more about the top-secret Goshawk Project in which Amanda is involved. He quickly realizes he is not the only one keen to learn the secrets of the project. When a badly mutilated body is discovered at the Goshawk Project's hangar - the result, it would appear, of a bizarre accident - Campion is drawn into a turbulent mix of industrial espionage and matters of national security. And as he attempts to get to the bottom of the deadly goings-on, it seems that the bicycles and punts are almost as dangerous as the aircraft . . .