Claire Gradidge on the Inspiration for Treachery at Hursley Park House 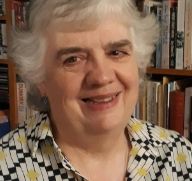 Inspiration strikes at strange times – and in strange ways. For Treachery at Hursley Park House, the second novel in my WWII series of crime novels set in and around the small market town of Romsey, it came as a vivid image of the opening scene. A party is being held in a stately home on the longest night of the year. Music, laughter, voices drift out into the frosty park where a young man lies drowned, a fragment of paper clutched in his hand.

I’ve always loved the austere glamour of a winter landscape. Though I had no idea where the image had sprung from, I had already decided on a winter setting for the book – specifically 1942/3, when the tide of war was beginning to turn in Britain’s favour. A further influence may have been my fascination with the idea of the outsider – in this book, it’s not only the dead boy who is left out in the cold.

I knew I needed to find a setting for the story that would take my readers further afield than Romsey. While my first novel, The Unexpected Return of Josephine Fox, (published as a result of winning the 2019 Richard and Judy Search for a Bestseller) had been set almost entirely in the town where I was born and brought up, for the second novel, I wanted to stretch my characters’ wings – and their roles. But the rest, at this stage, was still a mystery. What had happened, and how would my investigators, Jo (Josephine) Fox and coroner Bram Nash get involved?

Then came the part of writing that seduces me every time – researching the history, locality and real-life accounts I needed to provide the background for my story.

Hursley Park House – approximately six miles from Romsey – had been requisitioned late in 1940 by the Ministry of Aircraft Production following the air raids of September that year which had effectively destroyed the Woolston and Itchen works in Southampton where the Spitfire was designed and manufactured. Production of the aircraft was moved into innumerable small factories and works throughout the region, while the design and management team of Supermarine were relocated to Hursley. This real-life history provided me with the perfect location for my opening scene: a Victorian sunken garden with a central pool.

In my story, Jo is recruited to work undercover, investigating the leak of secrets from Hursley Park. Meanwhile, Bram becomes involved in finding out more about the young man’s death: not an accidental drowning as originally ruled, but a murder. Though their investigations begin separately, they soon interconnect, each discovering vital elements of the evidence they need to identify and track down the traitor – and killer.

A play, Howard Brenton’s The Shadow Factory – and a Heritage Open Day at Hursley Park House (now the HQ of IBM) played an important part in the development of the story, giving me fresh insights into the history of Supermarine’s occupation of Hursley House. I was lucky that both came before the first Covid lockdown was imposed – while the ‘Stay at home’ message was good for my writing output, it did put a hitch in some of the research. Like the protagonists of my story, I had to ask myself ‘Is your journey really necessary?’ Instead of travelling, I was able to find out about patterns of habitation and trace the byways that connected the various village settings of the story by studying old maps (courtesy of the National Library of Scotland), an unexpected pleasure for someone with relatively little sense of direction!

My first book had been written as part of a PhD thesis, and I’d had the luxury of a relaxed academic deadline in which to write – and rewrite – the novel. Winning the Richard & Judy prize – and getting the book ready for commercial publication – introduced me to the keener pressures of real-life publishing deadlines. I was hugely supported by my agent Rowan Lawton and then editor Katherine Armstrong in what felt like a whirlwind of edits and page proofs. It turned out to be good practice for what lay ahead. While I had always planned The Unexpected Return to be the first of a series, it wasn’t until June 2020 that my publisher, Bonnier, confirmed they wanted a further two books featuring Bram and Jo. With a deadline for the ms of Treachery at Hursley Park House set for the end of 2020, it was as well my inciting image – that drowned boy in a winter garden – proved such a strong foundation to build on.

I’m currently working on the third novel in the series, set around D Day. In this, the action of the book is once again focused on Romsey. Jo will have some huge challenges, both personal and professional, to overcome if she is to bring a killer to justice once more. 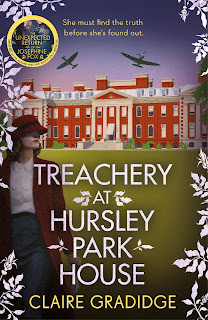 Treachery at Hursley Park House by Claire Gradidge (Bonnier Zaffre) Out Now DECEMBER 1942. As the war rages on, the accidental death of a young man is almost unremarkable. Except this young man was patrolling the grounds of Hursley Park House, where teams are designing crucial modifications to the Spitfire - and he was found clutching part of a blueprint. JANUARY 1943. Josephine Fox is given a code name and a mission as she is seconded to Hursley: uncover the network responsible for information leaks to the enemy. And when the dead man's father visits Bram Nash convinced that his son was innocent of espionage and the victim of murder, her friend is also drawn into the investigation. But as Jo and Bram circle closer to the truth, danger is closing in around them...