Perfect Crime is Liverpool's first ever crime fiction festival. Based at the Radisson Blu hotel on the stunning Mersey waterfront, it will host some of the biggest names in the world of crime writing. Ann Cleeves, creator of Vera, Shetland, and now the Two Rivers books & TV series, will be appearing at the all-day event for crime fiction fans in Liverpool on Saturday 13th November. Ann, a one-time Merseyside resident herself, says: ‘I can't wait to catch up with readers and writers is one of my favourite cities.' Ann Cleeves and Elly Griffiths will talk about the marginal communities and settings of their books in conversation with Rhiannon Ward, and Ann will and later compare forensic notes with eminent pathologist Professor James Grieve.

The star-studded line-up also features Sophie Hannah, Mel Sherratt and M W Craven. Author panels will discuss all things crime, from Agatha Christie through gritty psychological thrillers, to murder on the Mersey, and for budding writers, David Jackson will run a workshop on writing the killer pitch.

The day will open, appropriately, with Liverpool. A city steeped in culture and history but often marred by stark contrasts, over the years it has provided a rich seam of stories for writers from literary giants to saga writers. In ‘Murder on the Mersey’, four Merseyside authors will discuss the impact of their beautiful and often troubled hometown on their writing. For ‘Gritty and Gripping’, a panel which includes both serving and former probation officers will discuss just how they put the grit and grip into their thrillers.

Why are we so obsessed with damaged psychologies and the criminal mind – and what is it like to get into the mind of a killer? Crime fiction and film expert Barry Forshaw will quiz three skilled, award-winning writers of psychological crime on these questions and much more in ‘Mind Games’. And if you like your murder framed in a more elegant era, Martin Edwards, winner of the Edgar, Agatha, and Macavity for his non-fiction book The Golden Age of Murder, will focus on this rich and ever-popular subgenre with Sophie Hannah, who broke the Christie family’s forty-year ban on ‘continuation’ novels, and has now penned four new Poirots, with the Christies’ full blessing.

There will plenty of opportunities for readers to question their favourite authors, who will be available to sign copies of their latest releases and the book room will be open all day for purchases and signings. 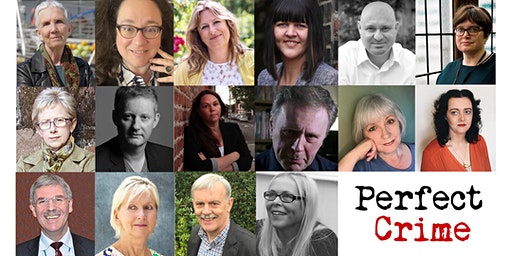 Perfect Crime is organised by local publisher Ian Skillicorn and Liverpool crime writers Margaret Murphy and Caz Finlay, who are also appearing at the festival. For Margaret, Perfect Crime fulfils a long-held ambition. She says: ‘In 2008, when Liverpool hosted the British Science Association festival, a discussion panel pitching crime writers against scientists sold out so fast that a second session had to be organised. It occurred to me then that Liverpool is a superb setting for a crime festival. It’s taken almost thirteen years, and is long overdue, but having put together a varied and exciting line-up of authors and experts we’re confident that crime fans will find it worth the wait. We look forward to welcoming writers and - most importantly - readers from far and near to a rewarding day of discussion and entertaining chat with some of the top names in British crime fiction and non-fiction.’

Find the full programme and ticket links at www.perfectcrime.uk